Octavia Spencer has been nominated for an Academy Award for her performance in The Help! Luckily, the actress already has a plan in place for what she’ll be wearing on the Oscars’ red carpet. 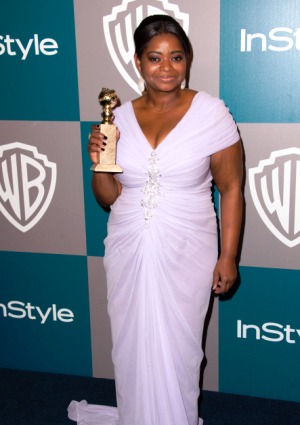 Octavia Spencer will be making the most of what she’s got on Oscar night. The 41-year-old, nominated for a Best Actress in a Supporting Role award for her performance in The Help, spoke of her fashion plans Tuesday.

One requirement of her red carpet dress? That it flatters her figure in the best way possible. “It’s just about accentuating the positives and blurring the negatives,” she said. “I want to accentuate the positive, which would be cleavage — even though it’s saggy cleavage, it’s cleavage! — and give myself an hourglass.”

But it’s not only about which designer can provide the best dress on such a monumental night; Octavia Spencer prefers to take into account who has been by her side all along.

She explained, “I’m all about being loyal to the people who gave me free clothes for the publicity tour when there was nothing in it for them… I love it that the other people are clamoring, but when I needed something, they weren’t there.”

In reaction to her Oscar nomination, The Help actress commented, “It’s numbing! There were no guarantees. I didn’t think I was in it and then they said my name and it was just a sigh of relief.”