Brandi Glanville knows the fastest way to get over someone is to get under someone else — so to ease her pain over all the pics of LeAnn Rimes having a blast with Eddie Cibrian, she got under Gerard Butler! 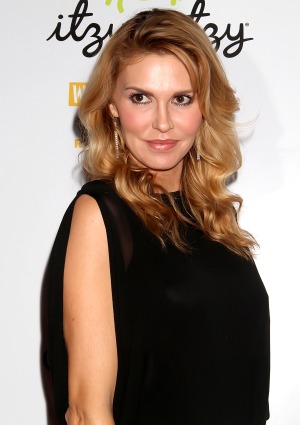 Not one to let her devious ex Eddie Cibrian have all the fun — after all, he does seem to spend most of his time gallivanting on the beach with his mistress-turned-wife LeAnn Rimes — Brandi Glanville has revealed a little hot summer dalliance of her own. The Real Housewives of Beverly Hills star says she totally got it on with one of Hollywood’s hottest bachelors!

Glanville spilled the beans during an interview on Watch What Happens Live.

“Who is the most famous person besides Eddie Cibrian that you have hooked up with?” she was asked.

Surprisingly the answer was not Demi Moore.

Did Brandi Glanville hook up with Demi Moore? >>

“I can’t plead the fifth… Uh, Gerard Butler,” she answered, shocking everyone in the studio.

“Was that more than once?” she was asked.

“It wasn’t a one-nighter,” Glanville explained. “It was like a little week of fun.”

Hypocrisy alert! Is Brandi Glanville the other woman? >>

Le rowr! So how was he? The question was posed: “On a scale of one to ten, how fun was it?”

Now that is great advertising for Butler if we’ve ever heard it. Not that Hollywood’s biggest playboy needs the help — he has been linked to Jessica Biel, Olivia Wilde, Ashley Greene, Mila Kunis and Ashley Olsen. The housewife is just another notch on his bedpost.

Glanville revealed that the dalliance occurred sometime last summer while she was shooting The Real Housewives of Beverly Hills — but she was off the crutches that hindered her through several episodes at the time.