Something good has come out of Steven Tyler’s ear-splitting delivery of the national anthem — besides punchlines for late-night TV comics, of course. A Boston-area receptionist has become a local celebrity in the 48 hours since the rock legend wore a New England Patriots scarf she designed during his appearance at Sunday’s AFC Championship Game. 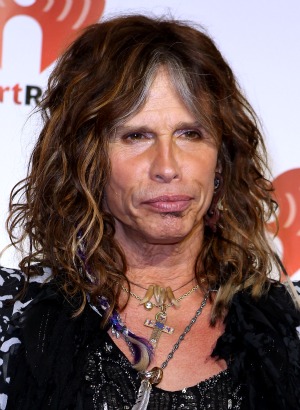 Wanna have something you’ve made go viral? Get Steven Tyler to wear it while yelping the national anthem at a football game!

Every Bostonian in Beantown wants the Aerosmith frontman’s Patriots scarf.

Who says Duchess Kate and Pippa Middleton are the only folks in Celeb-ville who know how to set off a fashion frenzy?

The homemade Pats scarf Steven wore during his  — er — colorful rendition of “The Star-Spangled Banner” has become a sensation around New England. Every self-respecting Tom Brady fanatic in a 150-mile radius of Gillette Stadium is looking to score one.

It was crafted from Kerry’s recycled 2010 Playoff sweatshirt.

Erin liked the scarf so much, so urged Steven to check out the accessory for himself. He did and asked to borrow the design, with the promise of returning it to McCormick after his performance.

Kerry said yes — on one condition: An autograph.

And sign it he did, “Kerry, I owe you. Steven Tyler,” the star wrote.

It didn’t take look for the scarf to go viral. The orders are flooding in.

McCormick, a former teacher and part-time Patriots employee, is scrambling to make as many of the gems as she possibly can before the Pats meet the New York Giants at Super Bowl XLVI Feb. 5.

“You can be an artist your whole life and your work can never be seen outside your four bedroom walls,” she told The Boston Herald this week. “But to do artwork to support the Pats and have it seen by millions of people, well, wow.”

If only Sunday’s AFC Championship Game had turned out as well for Steven. The talent show pundit continues to be slammed for screeching his way through “The Star-Spangled Banner” before the all-important gridiron game.

“I went outside to put a raccoon out of its misery — then I realized my neighbor was watching Steven Tyler sing ‘The Star-Spangled Banner,'” Fox News reporter Greg Gutfeld tweeted of the showing.

The Wall Street Journal wondered if Tyler’s anthem “is the worst rendition in recent history?”

We dunno. If you’re gonna ask the dude from Aerosmith to sing the national anthem, you have to expect a bit of screaming, no?

It’s like hiring Lady Gaga and then complaining that she showed up dressed as a hard-boiled egg!