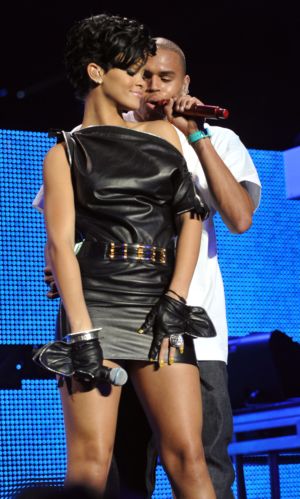 Aw snap! We hear Chris Brown‘s model girlfriend, Karrueche Tran, got into a skirmish with the crooner’s ex-lass, Rihanna, at a club in West Hollywood over the weekend.

The Barbadian beauty and the Vietnamese-born catwalker reportedly had to be separated by security at the Greystone Manor after exchanging a barrage of fighting words on Sunday night.

Karrueche (Kae) is upset that Rihanna’s male love interest in the controversial “We Found Love” music video bears a striking resemblance to Breezy, according to reports.

She also isn’t pleased by recent whispers that Rihanna and Chris have rekindled a clandestine romance, almost three years after he savagely assaulted the songbird on the dawn of the 2009 Grammy Awards.

Rihanna, on the other hand, is less than enthusiastic about a viral video of Karrueche making fun of her trademark island accent.

“[Chris and Kae] were on one side of the VIP and Rihanna was on the other. At one point, Rihanna walked over and Kae stepped to her,” an alleged eyewitness told Media Takeout on Monday.

Tweeters reported that Chris and Rihanna had no contact with each other during the night and that they left the venue separately.

But gossipers will gossip, especially since the last we heard RiRi had been secretly visiting her ex.

“Not only has she [Rihanna] initiated a Twitter conversation with Chris for all to see, but she has gone to see him,” a source told Life & Style magazine earlier this month. “She stopped by his studio recently — twice. She’s also calling and texting him a lot. She won’t let him go.”

Friends say Karrueche is convinced RiRi is trying to her best to woo Chris back.

The pair caused a bit of a stir last month, when they seemingly started tweeting loved-up messages to each other.

Chris’ rep denies that the former couple are reuniting.

Both Chris and Rihanna are due to appear at next month’s Grammy Awards. Here’s hoping it won’t be hand-in-hand!