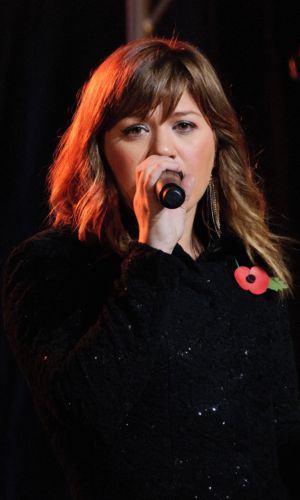 The soul and blues singer, best known for her R&B classics “At Last” and “Stormy Weather,” died last week. After a year-long battle against cancer and dementia, James succumbed to complications from leukemia at Riverside Community Hospital in California on Jan. 20.

The singer’s husband and sons were at her side as she quietly passed away.

“It’s a tremendous loss for her fans around the world. She’ll be missed. A great American singer. Her music defied category,” said Lupe De Leon, longtime manager for the legendary musician.

Clarkson — who will perform the national anthem at the Super Bowl in Indianapolis on Feb. 5 — was inspired to honor Etta in song upon learning of her death. So in fitting form, Kelly turned in a rousing rendition of her favorite James tune, “I’d Rather Go Blind,” first recorded in 1968.

“So this is for Etta,” Clarkson said before breaking into song.

Clarkson was a Texas cocktail waitress when she sang her way onto the very first season of American Idol, with the help of James’ signature tune, “At Last.”

Despite the reputation she cultivated, James will always be remembered best for “At Last.” Her jazz-influenced rendition of the ballad wasn’t the original, but it would become the most famous version of the song.

The track would also define James as one of R&B most underrated legends.