Jim Carrey’s daughter, Jane Carrey, impressed the American Idol judges enough that they sent her to the next round in Hollywood, but today sources are saying she got VIP treatment. 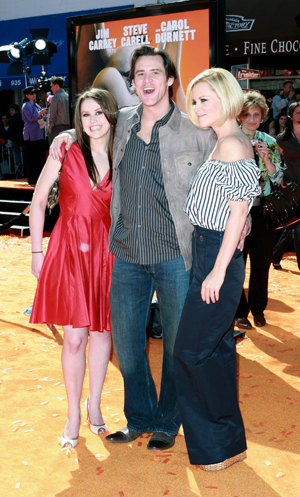 Did Jane Carrey, the daughter of Jim Carrey, get special treatment on American Idol?

“American Idol always says they don’t give everyone favors, but this time they did for Jane,” a source tells Radar Online.

Most contestants fight the elements and camp out for days to audition in front of Jennifer Lopez, Steven Tyler and Randy Jackson, however Jane (pictured here with dad Jim and his ex-girlfriend Jenny McCarthy) got to skip out on all of that.

“She didn’t have to sleep outside and wait for hours hoping to audition like everyone else,” a source reveals. “She basically had an appointment and showed up!”

Jane is the daughter of Jim and his first wife, Melissa Womer.

“Her audition was pre-arranged with the producers. She did not wait and line up for hours or days outside — she had a time, she showed up and went in,” the source continued.

Jane did impress the judges with the song “Something To Talk About” and they gave her a ticket to Hollywood, however, in her video tape she did admit that being the child of a famous celebrity is a mixed blessing.

“The last name definitely helps and hurts, I feel like there’s kind of this pressure to maybe be better, because if I make it somewhere, I run the risk of people saying ‘Oh, you only got there because of this.,'” she said.

Proud papa Jim, however, is excited for his daughter! “I can’t wait for the world to understand what she has,” he said. “Way to go. Oh my god, this is going to be an exciting year.”

Tell us:  What did you think of Jane Carrey’s American Idol performance?