Dust off your best pickup lines, girls: Simon Cowell says he and fiancée Mezhgan Hussainy are “on a break” and he isn’t sure if they’ll ever get married. 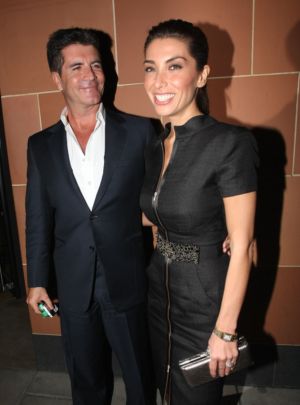 For now, at least.

The X Factor supremo described Mezhgan as “the one” during an appearance on The Tonight Show with Jay Leno in 2010. Now it seems the man who’s never at a loss for words isn’t very certain about his future.

The talent show honcho and the makeup maven dated for about two years. Thy were initially joined at the hip, with Simon even saying they wanted to have children together.

But the honeymoon is officially kaput.

In a chat with Britain’s Daily Mirror on Sunday, Simon confessed that he and Hussainy are on a break and he isn’t sure whether they’ll ever get married.

“It’s quite a complicated relationship. We have had a break from each other and we are still incredibly close,” he said.

Simon Cowell wanted to get it on with Paula Abdul >>

“‘I’m vulnerable. It’s not on, it’s not off. It’s somewhere in the middle. I don’t know if I will ever get married, but I am happy.”

The admission came after Cowell was photographed socializing with a succession of female friends during during a vacation to St. Barts earlier this month. Ex-girlfriends Jackie St. Clair and Sinitta were among those spotted partying on his luxury yacht.

Mezhgan, however, did not join the party.

Simon and Mezhgan have been dodging split whispers since August 2011. The Daily Mail blew the lid off the breakup scoop after allegedly receiving a tip from a Cowell camp informant.

“Simon and Mezhgan split up in August. He called it off and she wasn’t that surprised or even very bothered about it. Mezhgan told her friends she knew it had been coming for a while. She offered him the ring back but he has insisted she keep it.”

Simon Cowell would rather jump off a bridge than… >>

Even Simon’s mom, 86-year-old Julie Cowell pooh-poohed reports from his son’s spokesfolks insisting that Simon and Mezhgan were still very much an item.

“If you are Simon’s girlfriend, let’s be honest about this, you are not going to see very much of him. It’s very difficult for a girl to accept that. He doesn’t want anyone sitting in his dressing room when he’s working. Sometimes these girls want to be there too much,” she said.

“I think [the engagement] was too quick. This might give them the break they need to think it through. Marriage is a very, very big step.”

Don’t shed too many tears for Mezhgan — putting up with Mr. Nasty comes with some impressive perks. Sims says he regularly pays pseudo-spousal support to some of his exes, allowing the ladies to continue living a Cowell-esque lifestyle even after breaking up with him.

“You can’t have somebody in your life who’s become accustomed to a certain thing and just because you don’t want to be in the relationship anymore say to them, ‘Now everything is cut off.’ That doesn’t make sense,” he told The Guardian last year.

“It’s not alimony. It’s, I believe, doing the right thing. That comes back to me wanting them to be happy; you just can’t do it too many times.”

Simon’s former flame Terri Seymour lives in a multimillion dollar home paid for by the music mogul. Rumor has it that Cowell recently moved Hussainy into a posh “Ex-Girlfriend Pad” of her own in the Hollywood Hills.

It pays to get dumped by The Cowell!