Britney Spears’ former husband, Kevin Federline, was hospitalized after suffering a suspected heart attack on the set of an Australian reality show on Monday. The ex-backup dancer is a contestant on the Outback’s Excess Baggage, a weight loss reality series. 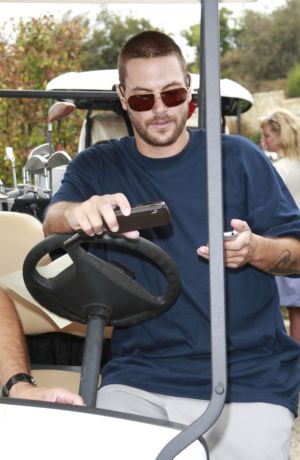 Kevin Federline was rushed to a Sydney hospital after collapsing on the set of an Australian weight loss reality show this week, complaining of chest pains.

Federline is a contestant on the Fremantle Media-produced Nine Network series Excess Baggage. The 33-year-old father of five and former Mr. Britney Spears had been attending a training session with the Greater Western Sydney Giants in Western Sydney when he began complaining of tightness in his chest, according to reports.

K-Fed was taken to the emergency room of Mt. Druitt Hospital. Doctors conducted an EKG test, which found he was not in cardiac arrest.

He’s been admitted to the hospital for further testing.

“Kevin was at Doonside with the Greater Western Sydney Giants, completing an AFL-related challenge,” the Nine spokesperson said.

“He did this challenge, which was running and catching the ball, then while his in-series weight-loss partner was taking the same challenge, he reported chest pains and a racing heart,” the rep continued. “Obviously on this show we have a lot of paramedics on standby and they treated him for the first signs of a minor cardiac arrest, called an ambulance and had him taken to hospital.”

Kevin Federline collapses in the Outback >>

This is the second time the backup dancer-turned-couch potato has suffered a medical problem on the Excess Baggage set since filming began nine weeks ago. In December, Federline fell ill with heat exhaustion while completing a similar challenge.

Kevin has had a well-documented battle against the bulge since his breakup with Britney in 2007. His quest to slim down was previously documented on the VH1 reality soap Celebrity Fit Club.

Federline welcomed a daughter with his girlfriend, ex-volleyball player Victoria Prince, in August.

7 hrs ago
by Araceli Cruz