Aerosmith frontman-turned-American Idol judge Steven Tyler took patriotism to a whole new level with a polarizing performance of “The Star-Spangled Banner” during Sunday’s NFL match-up between the New England Patriots and the Baltimore Ravens. 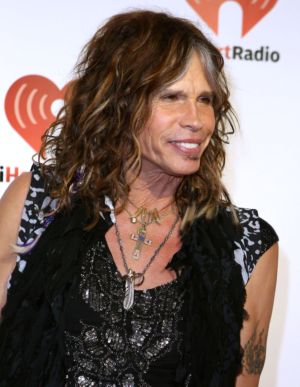 Dude looks like a lady, but he’s no Whitney!

It looks like Steven Tyler is the latest inductee to the Anthem Slayers Hall of Shame — which already sports an illustrious roster that includes Roseanne Barr, Kat De luna, Christina Aguilera and Lauren Alaina.

The American Idol judge is on the receiving end of some stinging criticism on the Interwebs after delivering a “screeching performance” of the American national anthem. Tyler paid tribute to the nation at the start of the AFC Championship match-up between the New England Patriots and the Baltimore Ravens in Foxborough, Massachusetts on Sunday.

Tyler’s rendition of “The Star-Spangled Banner” has been heating up the search engines since Sunday afternoon, dividing fans of the Aerosmith rocker and even sports commentators.

There seems to be two camps of reaction to Steven’s anthem. He’s either a rock god or a hollering feline who butchered the nation’s most beloved song.

Taking a cue from Ms. Aguilera, Tyler, 63, either fumbled the words (“as bombs bursting in air”) or slurred them (“oh the land of the free”) throughout much of the song. His creative license with the tune, prompted booing from the crowd of sports fans that braved frigid temperatures to pack Gillette Stadium.

A video of his performance was posted online and has since gone viral.

Professional singers were a little kinder to the loopy talent show pundit.

“Still love Steven Tyler; not the worst ‘Banner.’ Not even close,” actor Michael McKean wrote in a message posted to his own feed.

On a rosier note for Steven, his team managed to win and advance to Super Bowl XLVI. The Patriots will face the New York Giants in Indianapolis on Feb. 5. The pairing is a redux of Super Bowl XLII, where the Giants emerged as victors in 2008.

Watch the video and judge for yourself.

Was Steven Tyler’s performance of the national anthem bad enough to get him voted off if he were a contestant on American Idol?