Kathy Griffin knows no bounds when it comes to pulling a stunt on television. The comic, who stripped on New Year’s Eve while hosting alongside Anderson Cooper, has done it again. 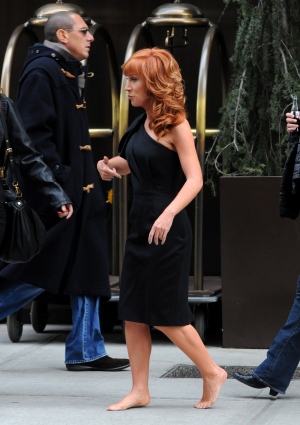 Did you watch Kathy Griffin strip off her dress for David Letterman on the Late Show Thursday night? In case you missed it we’ve got footage of the 51-year-old, who, it seems, is making quite the habit of losing her clothing.

The conversation started out innocently enough, with David Letterman inquiring how Kathy Griffin’s New Year’s Eve hosting gig alongside Anderson Cooper went. She replied, “Every year I try to up the ante a little bit. I’ve done it for five years now and I’ve been fired four years in a row… One year I said the F-word so I had to give the money back.

“I didn’t want to get fired,” she continued. “So this year I thought, ‘What can I do to not get canned?’ I thought it would be appropriate in Times Square to create a moment, so I took my clothes off. I didn’t tell anyone, I didn’t tell Anderson.”

Kathy Griffin, pictured here barefoot outside her New York City hotel before her appearance on the Late Show, then introduced the clip in which she jumps up and down without a shirt next to her shocked co-host.

“I mean, David, I’ll do it,” Kathy Griffin then offered, pulling down her dress strap.

“Go ahead. Wow, this is nice,” Letterman replied, offering to help her. “Is there anything I can do? I don’t think I should… Wow, oh, my, oh, buddy. We’re gonna need some pliers.”

Though David Letterman struggled to unhook the clasp of the dress, the pair eventually got the garment halfway off — and no more, because it turns out Kathy Griffin had gone to the show commando!

“I didn’t wear underwear because I didn’t want a panty line,” Kathy explained, showing enough of her slim hip to prove the no panty line wasn’t a fib.

“Wow, oh, man,” commented Letterman. “By the way, you don’t have to give the money back tonight. You’re fine.”