President Obama is expanding his resume with the revelation of a new talent: R&B singer. See his mini-performance at the world-famous Apollo Theater! 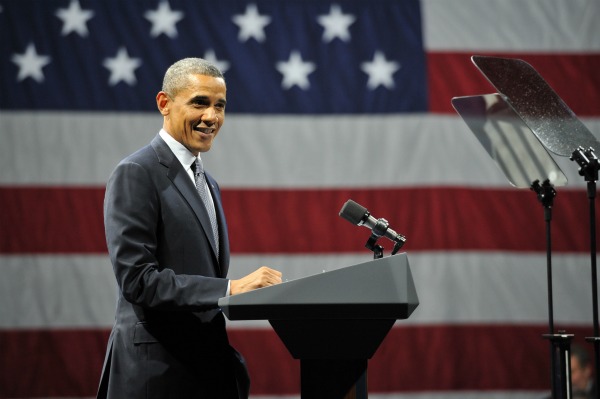 People, we have finally found the solution to reaching peace in the Middle East: President Obama just needs to sweetly serenade everyone into submission.

Obama wowed the crowd last night during a campaign fundraiser at the world famous Apollo Theater in Harlem, New York last night by singing a few lines of the sweet and sexy Al Green song “Let’s Stay Together” — and we gotta say, we are impressed!

The President revealed a lovely singing voice complete with vibrato, a skill many professional singers take years to develop.

After wild applause, Obama joked that the Sandman hadn’t come out to sweep him off the stage — a reference to the Apollo Theater tap dancer who would chase acts away if they were booed by the crowd.

What does singer Al Green think of the President’s rendition of his famous song? Loves it!

“He nailed it,” Green told TMZ. “I was thrilled that the President even mentioned my name, and if the President can get the economy going again and get everything going that he wants to, then we’ll all be together.”

President Obama made the appearance to raise funds for his 2012 Presidential election campaign.

Think he sings like that to Michelle Obama when they’re alone at night?