Cracks are starting to show in Bethenny Frankels’ marriage — but is the couple really on the verge of a split? The reality star opens up. 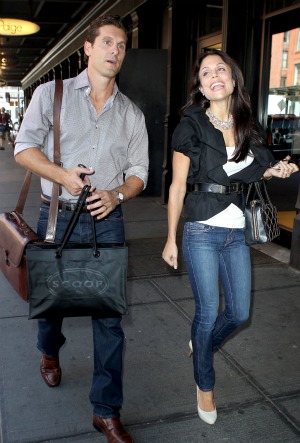 The new season of Bethenny Ever After will show that not everything is sunshine and roses in the marriage of Bethenny Frankel, but the reality star told reporters it is all par for the course as the couple continues to grow together.

Frankel discussed the state of her union while promoting the upcoming season of her show.

“I just turned 41, and to be perfectly honest, I unintentionally crammed everything in,” she explained at the NBC Universal TCA Press Tour. “I got pregnant. I got married eight months pregnant, and now I sold my business or part of my business. We’re just settling into what married life really is without the excitement of a wedding and the baby.”

“We come from totally different backgrounds, and we’re going through it,” Frankel said of her marriage to Jason Hoppy. “I’m in therapy. I’ve always been good at business, but I’ve always struggled with relationships based on my background, and we kind of get into that this season.”

Frankel revealed in the past that her childhood was far from ideal: She was abandoned by her father and raised by an abusive mother who suffered from alcoholism and an eating disorder.

How much did Bethenny Frankel really get for Skinnygirl? >>

“I was broke a lot of the time, so we meet in the middle and relate to that,” Frankel said. “With recent success, we’ll both be so overwhelmed and not know what we’re supposed to be doing. We bought an apartment, but we don’t even know what to put in it because we’re just used to buying everything at Ikea.”

“I met him right when the wave was cresting, and so that’s the good news, that I didn’t meet him right now,” Frankel said. “It would probably be more overwhelming for both of us, but when I go to visit his family it’s so different that I can’t even imagine that being my background.”

“I grew up on the racetrack living ?? I went to 13 different schools. It’s not even in the realm of possibility. It would be like saying I lived in Siberia. So I appreciate our differences, and I love that my background has made me everything that I am now.”

“I do get along better with my husband’s parents now. I do. It’s more about acceptance. Jason and I have both learned to accept each other,” she said. “When we met each other in a nightclub, it took months for us to realize, ‘Oh, wait. I really married you. Like, you said you were all these things, but you really are all these things.’ That’s the same thing with both of us. This is who we both are and we are both learning to accept.”

“So this season we really do go there, and, you know, my relationship has amazing ups. We’re partners. We’re in love. We are together in it, but we struggle. We’ve had a lot go on, and we’re dealing with it together, and this season shows that.”

Watch all of the couple’s ups and downs when the new season of Bethenny Ever After premieres Feb. 20 on Bravo.