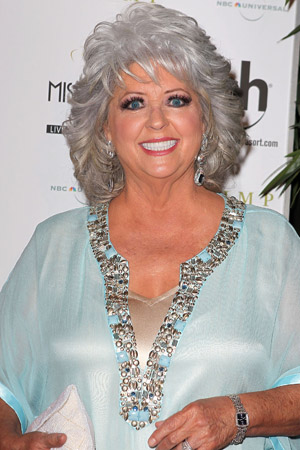 Paula Deen isn’t about to let her haters stop her from eating a slice of birthday cake. The Georgia-based chef appeared on new ABC talk show The Chew to talk about her diabetes diagnosis and her new role as spokeswoman for global healthcare company Novo Nordisk.

However, Deen revealed that she — along with sons Bobby Deen and Jamie Deen — are “in a position” to “set aside a certain percentage [of the Novo Nordisk money] and we’re donating that back to the ADA (American Diabetes Association).”

Then she happily ate a piece of the birthday cake given to her by The Chew hosts. (Her 65th birthday was Thursday.)

5 Paula Deen recipes that could give you diabetes >>

“Her behavior is egregious. Paula Deen had the chance to do the right thing and she blew it,” Snyderman said Thursday on the NBC morning show. “The idea is to prevent diabetes, not to treat it after the fact.”

Deen doesn’t see it that way.

We’re not so sure she’s right about that, but it was her birthday.

Still, Deen told The Chew gang that she wants people to take away more than a diabetes message when they think about her life.

“When my life is over, and you hear my name… I hope you associate the word ‘hope’ with it,” she said.