Elton John’s husband David Furnish is backtracking a little bit on bitter comments he sent Madonna’s way after she nabbed a Golden Globe — but it’s not quite an apology. 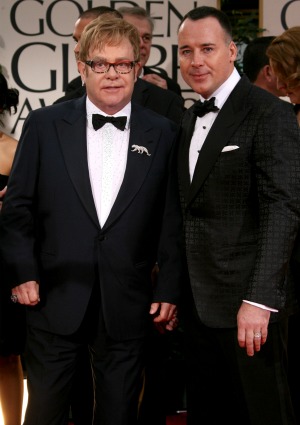 David Furnish is not quite sorry about the incredibly catty comments he made about Madonna’s Golden Globes win — but he addressed the issue on Facebook today anyway.

Furnish was angry that Madonna beat out his husband Elton John for the Best Original Song award at the Golden Globes last week, but he said the reaction to his super-mean comment was much ado about nothing.

“Wow! What a tempest in a teapot,” Furnish wrote on Facebook today. “My comments regarding The Golden Globes have been blown way out of proportion.”

“My passion for our film Gnomeo & Juliet and belief in Elton’s song really got my emotional juices going. But I must say for the record that I do believe Madonna is a great artist, and that Elton and I wish her all the best for next week’s premiere of the film W.E.“

While not exactly an apology, the new statement is a far cry from the catty comments Furnish made immediately following the Golden Globes, where his hubby lost out to Madge for Best Original Song.

“Madonna winning Best Original Song truly shows how these awards have nothing to do with merit. Her acceptance speech was embarrassing in its narcissism. And her criticism of Gaga shows how desperate she really is.”

The mean vibe started on the red carpet before the awards even started, when Elton John told Carson Daly “Madonna doesn’t have a f*****g chance” of winning. He later ate his words.