William Shatner meets his end as the Priceline Negotiator, via a fiery bus crash. Why now? 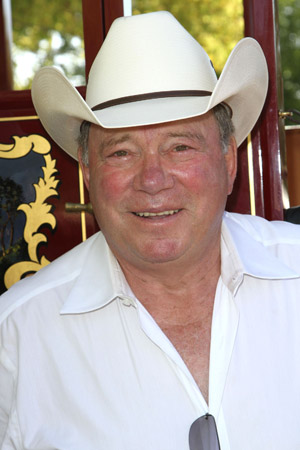 Don’t call William Shatner the next time you want a good deal on travel! The former Star Trek star has been ditched by the discount travel website after 14 years as the Priceline “Negotiator.”

“I’m in grief mode,” Shatner told the Associated Press this week. “It’s not the first time I’ve had an iconic character die off.”

And die off he does. In the 30-second spot, Shatner saves panicked passengers from a bus teetering off a bridge.

“Save yourselves — some money,” he says, giving his cell phone to one of the vacationers. The bus then falls off the edge, killing Shatner in a fiery explosion.

So, why is Shatner getting the heave-ho from Priceline? It was just time, they said.

“The challenge is harder to get people’s attention than it used to be. … So we decided to do something really over the top to get the message across,” said Christopher Soder, CEO of Priceline.com North America.

A new spot — without Shatner — will debut online first and then possibly air during Super Bowl weekend, according to Soder.

Luckily, the 80-year-old actor still has his one-man Broadway show to keep him busy. The show — Shatner’s World: We Just Live in It — takes audiences on “a voyage through Shatner’s life and career, from Shakespearean stage actor to internationally known icon and raconteur.”

Still, we’ll always remember Shatner for his role as Captain Kirk on Star Trek, whether he likes it or not.

“Over the years, I’ve become barraged by comments from people, such as, ‘Beam me up, Scotty!’ and I became defensive,” he told the Huffington Post in 2011. “I felt they were derisive and engendered an attitude. I am grateful for the success.”

Do you agree with Priceline’s decision to ditch William Shatner?