Travis Barker is waging a battle to keep pictures of his man parts off the internet. Will he win? Read on to find out. 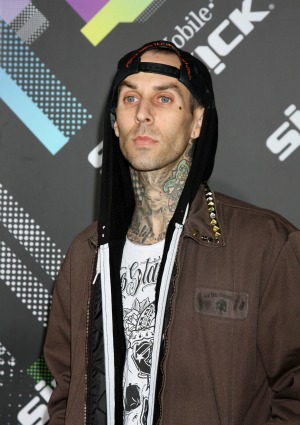 Want to see Travis Barker‘s wang? Neither do we (no offense Trav), but apparently over 400,000 people have other ideas.

MediaTakeOut posted images of the genitalia of an “unnamed musician” with a “jank… the size of a microphone” sent to them by a female admirer, and readers quickly deduced that the package belonged to none other than Blink 182 drummer Travis Barker.

How the heck did they know that? By his distinctive tattoos, of course!

Rather than being proud of the compliments his junk was getting, Barker sicced his lawyers on the gossip site. His legal team fired off a cease and desist letter to the owners, stating their usage constitutes an “unauthorized use of private photos” and demanding they be removed immediately or face legal action.

The site eventually complied, but not before garnering upwards of 400,000 page views.

Travis Barker: My life changed after the plane crash >>

A source told TMZ that the photos are about five years old, taken before the plane crash that left him and DJ AM critically injured and the drummer dramatically scarred (DJ AM later died of a drug overdose). The tattoos identified by readers are in the midst of being repaired as close to their original state as possible.

“Where I got burned… I started finishing some of the tattoos that got burned off,” he told paparazzi last June.

Read on for more celebrity nude photo scandals on SheKnows >>

Barker alluded to the scandal on Twitter this morning, writing, “Up n’ At em! Another blessed day~ Hope today is less action packed then yesterday was for me… Crossing my fingers that never happens again!”