Rihanna and Coldplay will perform together at the 2012 Grammy Awards. What’s up with this odd match-up? 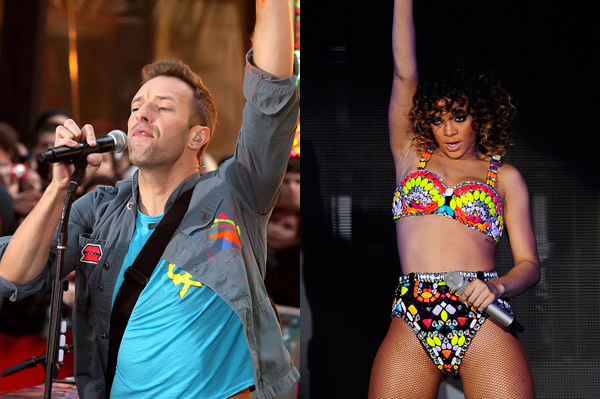 We’re finally pumped to watch the Grammys this year: Rihanna and Coldplay have officially been added to the roster of performances for the show airing on Feb. 12.

“WE reached 2BILLION views on @youtube !!!” Rihanna hinted on Twitter while on vacation in Hawaii. “THANK U!!! I’m in a great mood, and I got some GREAT NEWS!!! PRINCESS OF CHINA #GRAMMYS2012.”

She later made the announcement official.

“My friends @ColdPlay and I will be sharing the stage for a performance at this years Annual Grammy Awards! #BONKERS,” she tweeted.

The song — featured on Coldplay‘s new album Mylo Xyloto — is comprised of the band’s signature sound, along with a bit of RiRi’s recognizable voice.

This isn’t the first time Coldplay lead singer Chris Martin has teamed up with a hip-hop musician. The husband of Gwyneth Paltrow sang the hook on the Kanye West song “Homecoming” from his 2007 album, Graduation.

Coldplay decided to take chances on Mylo Xyloto after the deafening criticism of their last album, Viva La Vida or Death and All His Friends.

“Some people say we’re talented and some say we’re the worst thing ever to happen to music, and it’s a bit confusing being in the middle of that,” Martin told PitchFork.com in October.

“All the noise reached a zenith on the last album– we started getting lawsuits and just being taken apart. S****y stuff. So we were like, “F**k it, we’ll make a record that really reflects what we listen to, and it doesn’t matter what category it comes from.”

We love the result — and we can’t wait to see Coldplay and Rihanna live at the Grammys.

Which performances are you looking forward to at the 2012 Grammy Awards?