Is Heather Locklear a victim of domestic violence or the perpetrator? That’s what cops and the Los Angeles City Attorney’s Office are trying to determine today. 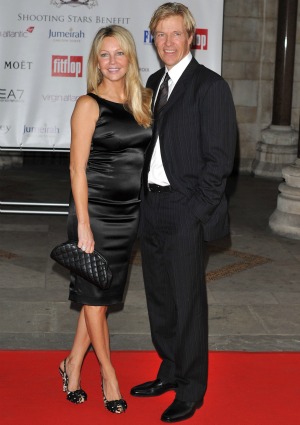 Heather Locklear and Jack Wagner are the subject of a police investigation after cops discovered the pair got into a heated fight before she was admitted to the hospital — and things allegedly got physical.

Sources say things got rough between the two after Locklear and Wagner ended their engagement and he stopped by her house to return some of her things.

“A huge argument erupted as they insulted each other’s families,” a source told Star magazine.

“As Heather went to her car, Jack lunged at her, trying to grab or push her. Her reaction was to swing. She caught Jack with a right hook across his face, knocking him to the ground.”

Locklear then allegedly grabbed Wagner’s dog and ran inside her house. When he followed her in, she called the cops.

Heather Locklear, please stop being so hot — it’s not fair >>

“She lost it on him and he retaliated,” a law enforcement source told TMZ.

An investigation is currently underway to determine exactly what went down and who, if anyone, should face domestic violence or battery charges.

Locklear was rushed to the hospital last week after her sister caught her mixing pills — thought to be Xanax — and alcohol. She was released the next day.

Read on for more celebrity justice on SheKnows >>

“She is in no danger and she’s going to be just fine,” her parents Bill and Diane Locklear said in a statement to the press last week.

SheKnows is awaiting comment from both Locklear and Wagner’s reps. Stay tuned!