Rihanna and Chris Brown are carrying on a secret love affair despite his arrest for beating her up three years ago, sources claim. Say it ain’t so, Ri! 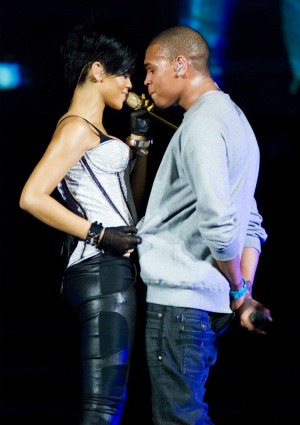 They found love in a hopeless place — and now, despite domestic abuse, an arrest and a previous restraining order rumor has it Rihanna and Chris Brown are back together.

Inside sources spilled the news that the pair has been secretly hooking up for nearly a year, and that the pair just can’t seem to escape each other’s clutches.

“She comes to see him anytime she’s in L.A.,” a Chris Brown confidante told Us Weekly.

A pal of Rihanna’s confirmed the rumor. “Rihanna loves to live dangerously, and talking to and hooking up with Chris is all part of that,” the source said.

“They can’t get enough of each other. I don’t see it ending well,” added another insider.

The couple officially split after Brown was arrested in February 2009 on battery charges for beating the crap out of Rihanna in a parked car the night before the Grammy Awards. According to Brown’s initial probation report, this wasn’t the first time he got violent with his lady: He shoved her into a wall once, and punched the window out of a Range Rover in anger during an argument.

Brown was sentenced to five years probation with six months of community labor and a five-year restraining order preventing him from being anywhere near Rihanna. However, last February Rihanna requested the restraining order be minimized, allowing she and Brown to be in contact again as long as he doesn’t harass her.

Since then they have re-friended each other on Twitter and even got caught sending not-so-secret messages to each other.

If true, it’s bad enough that Rihanna would return to her abuser — but it would also mean Brown is cheating on his model girlfriend Karrueche Tran.

As for the singers themselves, one flat-out denies it and the other isn’t talking.

“He and Rihanna are just friends,” Brown’s rep told Us. “He’s not cheating.”