Neil Patrick Harris isn’t quite settled on what to call the love of his life, David Burtka. “Boyfriend” doesn’t describe their commitment, and yet “partner” feels a little too giddy-up. 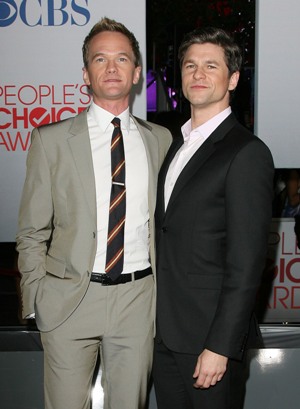 Neil Patrick Harris and David Burtka are on the cover of Out magazine’s “The Love Issue.” The pair, parents of 15-month-old twins Gideon and Harper, opened up about their relationship by penning essays for the annual issue.

Speaking of David Burtka, Neil Patrick Harris wrote, “There’s something kinetic about him and his being. He’s classically sexy, yet he’s very much a boy in his energy. It’s a great dynamic. When I see people who are equally attractive, they tend to seem more quiet and kind of Marlboro Man-y, and David’s the antithesis of that. He’s more like Tigger.”

“I tend to weigh options before making decisions, and David is the polar opposite of that,” the actor wrote of their personalities. “We’re hyper similar and also incredibly opposite. We share a wardrobe. We have the same shoe size, body size, height, and weight. We’re both Gemini. We both like the idea of family — not a nuclear family, but a social family. Yet, we’re incredibly opposite in the way we process information.”

Though the pair is happily engaged now, it wasn’t equally love at first sight.

“I initially fell for David harder than he fell for me,” explained Harris. “I was in love with him before he was comfortable saying it, and I think that speaks to our past experiences. I remember saying, ‘I think I love you,’ and he was like, ‘That’s really nice,’ which is not necessarily what you want to hear. But I appreciated his honesty in not jumping the gun and saying something because he felt obliged to.”

“I’m not the biggest fan of the word ‘partner,'” the How I Met Your Mother star said of trying to put a label on their relationship. “It either means that we run a business together or we’re cowboys. ‘Boyfriend’ seems fleeting, like maybe we met two weeks ago. I’ve been saying “better half” for as long as I’ve been able to. I think it’s a little self-deprecating and clearly defines that we’re in a relationship, but it would be nice to say ‘my husband.'”

Visit Out for a few words from David Burtka, and Neil Patrick Harris’ full article.