Paris Hilton, singer, is planning a comeback! To make it happen she’s calling on her old pals, the boys from LMFAO. 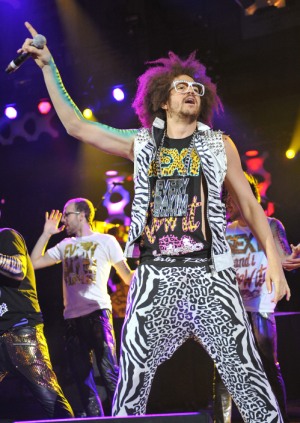 Lucky for Paris Hilton, she and LMFAO go back — way back. Far enough that she’s willing and able to call in a favor and ask the “Party Rock Anthem” boys to jump start her music career.

What music career? Surely your remember the socialite’s 2006 Paris album! Though met with mixed critical reception and low sales, the song “Stars are Blind” became a top ten hit in 17 countries.

“We’re going to be doing my new single with LMFAO,” Paris Hilton told MTV News. “I’ve known them since I was a little girl. We grew up together ’cause our parents are friends, so I’m just so proud of them and all their success and what they’ve done ’cause they’ve just created this whole “Party Rock” brand and it’s just so awesome.”

“It’s completely different from my last album,” Paris Hilton continued. “I’m going with a whole new genre. I have Afrojack executive-producing the entire album. So we’ve just been coming up with the most incredible tracks,” she added. “I was just in the studio with RedFoo the other night.”

LMFAO give props to Paris Hilton >>

Despite the lukewarm reaction to her initial forte into music, Paris Hilton insists trying for another album is worth the effort. “I think a lot of people don’t know that music is my passion since I was a little girl,” the heiress, who grew up singing in the choir and can also play violin, piano and guitar, said. “I’m very musically talented. This is more my thing [musically on this album], more of a club scene, more dance… The single’s done; it’s in the can. That’s probably going to be out [within] the next month or two.”

Do you think LMFAO can make Paris Hilton into a music star?