As news of Paula Deen’s Type 2 diabetes diagnosis spread, followers of the Southern cooking maven awaited a response from nemesis Anthony Bourdain. See just what the fellow chef had to say Tuesday! 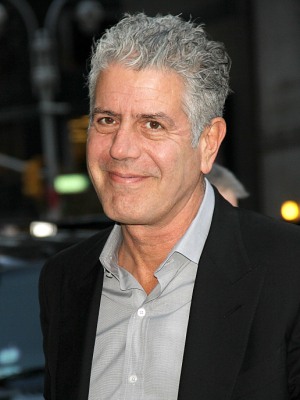 When word broke Tuesday of Paula Deen‘s diabetes announcement fans of celebrity chefs knew it was only a matter of time before her sworn enemy, Anthony Bourdain, responded. True to form, the man who once called Deen the most dangerous person in America, took to Twitter to share his thinly veiled opinion.

Early Tuesday morning Paula Deen appeared on the Today show to announce her Type 2 diabetes diagnosis. Though rumors have circulated the celebrity chef has been dealing with the disease for years, this was the first time she made any admission.

An admission that, much to the irking of Anthony Bourdain, came right along with a promotional deal. Paula Deen, out and proud Type 2 diabetes sufferer, is now the spokesperson for Diabetes in a New Light — a site run by pharmaceutical company Novo Nordisk.

Barely masking his response to Paula Deen’s diabetes admission and ensuing endorsement deal, Anthony Bourdain tweeted Tuesday afternoon, “Thinking of getting into the leg-breaking business, so I can profitably sell crutches later.”

Response from the public to Paula Deen’s diabetes diagnosis has been mixed.

Siding with Bourdain one person wrote Tuesday, “I would never make any of her recipes! Butter, Cream, High Fat, High Calorie Sugary Recipes. NO WAY, love yourself and your family enough to never cook like she does. It is like putting a loaded gun to your head. I think what she is doing is hypocritical and hurtful to those with diabetes. I think she hid it because she cares more about her next endorsement and her bottom line then she does about her viewing audience or cookbook buyers.”

Defending the cooking queen one gossip reader commented, “Don’t like the food don’t got to watch the show or follow the recipe. This is like people suing McDonald’s. Bourdain needs to STFU.”

Still another commenter, apparently no fan of Deen or Bourdain wrote, “They’re both charlatans for their respective fields. Six of one, half dozen of the other.”

Whose side are you on? Team Anthony Bourdain or team Paula Deen?