What would the story of Finding Nemo be like with today’s modern technology? Watch as Ellen DeGeneres, voice of Dory, gives the film a questionable upgrade. 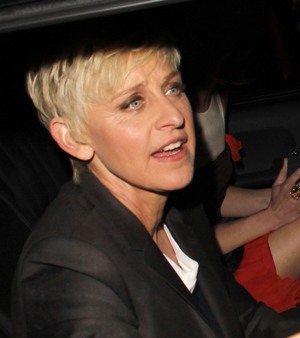 Ellen DeGeneres is headed back to the big screen as the voice of Dory thanks to plans to re-release Finding Nemo in 3-D. Looking forward to the Sep. 14 release date, the host and voice talent spoke about the film on a recent episode of The Ellen DeGeneres Show.

Ellen DeGeneres, pictured here arriving at the 2012 People’s Choice Awards on Jan. 11, announced to cheers from her studio audience, “I don’t know if you’ve heard, but Finding Nemo is getting re-released in 3-D!”

“It’s exciting,” she continued, “Not as exciting as a sequel would be, but still…”

Introducing the upgraded clip Ellen went on, “Anyway, they’ve updated the film and while I’m glad they made it more current, I’m not sure I like it as much as the original. Take a look.”

The following 20 seconds of Finding Nemo show Marlin (Nemo’s father) clutching an iPhone with his fin, as the electronic voice of Siri solves the problem of his lost son. “Your son Nemo is in Sydney,” Siri states, then the clip cuts to Marlin and Nemo’s reunion — the end!

Doesn’t have quite the same sense of adventure as the original, now does it? Watch Ellen’s updated clip of Finding Nemo with Siri below!

Are you planning to go see Finding Nemo 3-D?