Here’s a day we never thought would come: A court date where Lindsay Lohan’s behavior was actually praised by a judge instead of punished. Read on to find out what happened at her probation hearing. 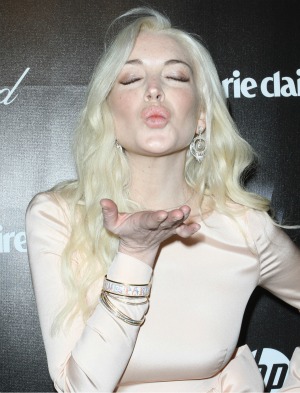 Will wonders never cease? Lindsay Lohan actually received positive feedback from a judge today instead of the usual disbelief that she screwed up yet again.

Lohan arrived a whole 15 minutes early for her probation progress report hearing and actually dressed appropriately for the occasion in dark pants, a white blazer and a gray top with a neckline right above her collarbone.

Judge Stephanie Sautner was impressed with the turnaround the star has made, especially with her hard work at the county morgue where she was ordered to complete her community service.

“She has done it all on schedule,” Judge Sautner said during the proceedings. “Just keep doing what you are doing, probation officer has written a favorable report, we will see you back here on Feb. 22, and you need to complete 15 days of community service and five therapy sessions by that time.”

The judge’s words are a far cry from her criticism last fall, when she ripped Lohan a new one for skipping out on her service at a women’s shelter and doing the bare minimum to skate by.

Lohan is still under probation for a 2007 DUI case, as well as the infamous stolen necklace fiasco.

If she continues on the judge’s schedule she will be done with the DUI probation, and her theft case probation will drop down to a non-supervised type.