Michelle Williams says her relationship with Heath Ledger was “cosmic” and things moved so fast because they had so little time. What else did she tell GQ about her ill-fated romance? 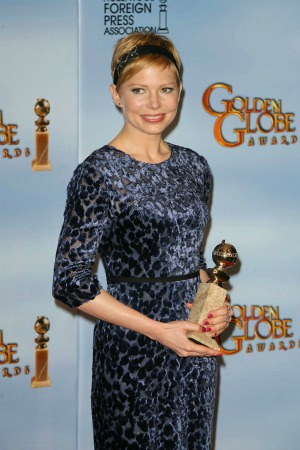 Michelle Williams has come a long way from her Dawson’s Creek days, but there is one part of her past she will publicly never escape: Her relationship with the late Heath Ledger. In a new interview with GQ, the My Week with Marilyn actress lets us in deeper than she has since Ledger’s tragic death.

When asked why she and Ledger were drawn to each other, the newly-minted Golden Globes winner chose her words carefully, wanting to preserve something of their relationship just for her.

“Our initial meeting, the circumstances of how we first met, were cosmic or something.”

The pair coupled up during the shoot and she was soon pregnant with now 6-year-old Matilda. “Yeah, a lot of things happened at once,” she said. “It’s a bit like: We had a lot of things to do, because we didn’t have a lot of time, or something.”

While she refused to reveal how she learned of Ledger’s tragic death, she did talk about the dark times that came afterwards, her grief compounded by the constant intrusion of the paparazzi.

Michelle Williams “piggy backed by a drunk person” on vacation >>

“It was making me crazy. I felt like I was going crazy,” she said. “It was too much — trying to deal with what had happened and trying to deal with what was at our doorstep. I just felt trapped. And it’s not just me — there’s somebody else who I’m trying to protect, and I can’t. I can’t make it stop, I can’t make it go away. Trying to find ways to explain it or shield her from it. It’s like you’re trying to go about your life, and make dinner… but the roof is off of your house, and the walls are falling down.”

In a rare moment of absolute candor about Ledger, Williams revealed her ultimate fantasy: That somehow, some way, his death never happened and the two of them ended up together again.

Read the entire interview with Michelle Williams on GQ.com.