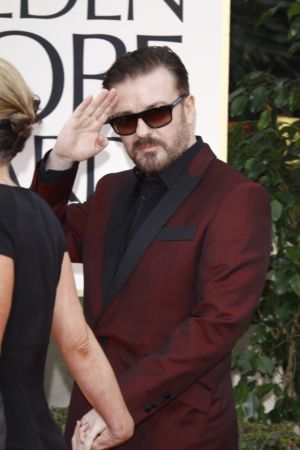 Ricky Gervais is hanging up his microphone as host of the Golden Globes.

In a posting to his blog on Monday, the creator of The Office announced that the third time truly was the charm for him and he’s ready to move on. He may have gone out with a relative whimper, but the British funny guy says he has no problem hanging up his hosting hat.

“I had a blast actually. It was by far my favorite of the three hosting stints,” Ricky wrote.

“I’ve told my agent to never let me be persuaded to do it again though. It’s like a parachute jump. You can only really enjoy it in retrospect when you realize you didn’t die and it was quite an amazing thing to do.”

Gervais toned down his jokes after last year’s controversial hosting performance. The professional wisecracker came under fire from the Hollywood Foreign Press Association (which produces the Globes) and a host of celebs for his stinging personal barbs against several Hollywood heavyweights, including Bruce Willis, Hugh Hefner, Charlie Sheen and Robert Downey Jr.

Ricky leaves his post pleased that this year’s crowd seemed to take his jokes in stride.

“The crowd were [sic] great this year, too. I think they finally worked out that my gags only seemed rude and nasty, but were actually not too scary at all. Or they were just drunker. Either way, it was fun, but I’m glad to say I’m off to New York to chill out a bit. Ahhhhhh. And relax.

Did Ricky Gervais fall flat at the Golden Globes? >>

Gervais’ infamous brand of humor didn’t scare off many viewers either. The 2012 Globes telecast was down only slightly compared with last year.

This year’s show pulled in 16.8 million viewers for NBC, versus 17 million in 2011. The star-studded Globes won its time slot for the night, beating shows like The Simpsons on Fox, CBS’ The Good Wife and Once Upon a Time on ABC.

How do you feel about Gervais’ decision to end his run as Golden Globes host?