It’s diva versus diva in a long-simmering feud between Elton John and Madonna — and her Golden Globes win last night reignited the battle! 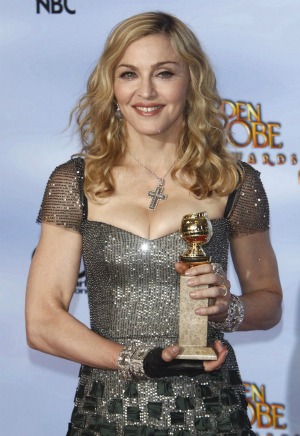 Madonna squared off against Elton John at the Golden Globes Sunday night, and when the Material Girl won for Best Original Song his partner David Furnish completely lost his mind.

The cattiness actually started on the red carpet before the ceremony when John told Carson Daly,”Mary J [Blige] might win it for The Help. Madonna doesn’t have a f*****g chance.”

Madonna’s response: “Was he wearing a dress?”

“Damn him, those are fighting words,” she continued. “OK, well may the best man win.”

As fate would have it, Elton John was wrong. Madonna won for her song “Masterpiece” from the film W.E. — which she happened to direct as well — and John’s husband exploded in rage all over Facebook.

“Madonna winning Best Original Song truly shows how these awards have nothing to do with merit. Her acceptance speech was embarrassing in its narcissism. And her criticism of Gaga shows how desperate she really is.”

In her acceptance speech, the singer said of manager Guy Oseary, “He harangued me for the entire time I was filming and editing my movie to write a song. And I said, ‘Please, Guy, I’m trying to focus on being a director and I want people to be able to pay attention to the film. And I don’t have time.’ So then I finished the film and I started making my record and somehow magically and miraculously the song emerged, ‘Masterpiece,’ so thank you, Guy Oseary, for being so irritating.”

What does Madonna think of the criticism? Not much. She pretty much laughed it off back stage at the ceremony.