Ricky Gervais gave a somewhat restrained performance at the Golden Globes last night, but one zinger got the room talking: He pretty much outed Jodie Foster. 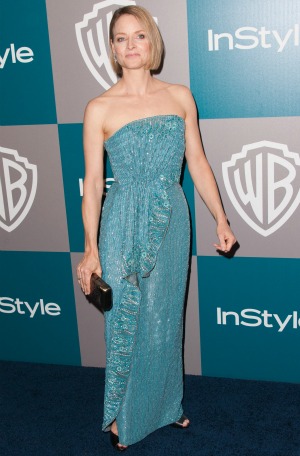 One of the worst-kept secrets in Hollywood is the sexuality of Jodie Foster. While she has never officially come out of the closet with any kind of public announcement, rumors that she is a lesbian have been around for years.

Ricky Gervais pretty much answered that question for us last night when he outed her at the Golden Globes.

While reading a list purported to be topics he was not allowed to discuss during the broadcast, Gervais said, “And I mustn’t mention Mel Gibson this year. Not his private life, his politics, his recent films or especially not Jodie Foster’s Beaver,” in a play on words about the two actors’ film together, The Beaver.

Far from being upset, Foster smiled broadly and gave Gervais the thumbs-up sign, despite the fact that her two sons were sitting next to her listening to the sexual innuendo-laden speech.

The Academy Award-winning actress is often seen out and about with her two sons — whose biological father has never been revealed — and a couple of women many believe have been her girlfriends. She is thought to have been in a long term relationship for 15 years with film producer Cydney Bernard, although the only time any reference was ever made to their affair was when Foster thanked “my beautiful Cydney, who sticks with me through the rotten and the bliss” at the 2007 Hollywood Reporter‘s Women in Entertainment event.

They are believed to have split in mid-2008 and Foster has since been seen out and about with a new unnamed girlfriend.

Even her now-estranged brother has commented on Jodie’s sexual preference, writing in his 2007 book Foster Child, “I have always assumed Jodie was gay or bisexual.”

Despite her laughter at Gervais’ good-natured ribbing, Foster still has not commented on the state of her personal life — but she really doesn’t have to.

Watch Ricky Gervais out Jodie Foster at the Golden Globes: