Kate Winslet picked up an award at the Golden Globes for her part in Mildred Pierce — and the actress shared her “manly” dream role. 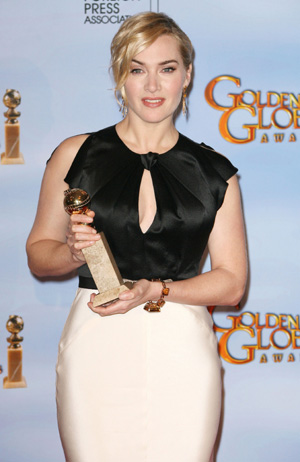 From Titanic to cross dresser? Kate Winslet won the award for Best Actress in a Mini-Series for Mildred Pierce at the Golden Globe Awards last night, however there is another role she has her eye on.

The actress, who has won Golden Globe awards for The Reader and Revolutionary Road, told reporters there is another role she would like to take on — a man!

“I don’t know what kind of man, and I don’t know if that would happen or not, but I would be very interested in that because I think that would be the ultimate challenge,” she said.

Check out the complete list of Golden Globe winners here >>

Winslet also side-stepped questions about her playing Elizabeth Taylor, as well as Lindsay Lohan playing the screen icon in a Lifetime movie.

“Kate — would you consider playing Elizabeth Taylor? And what do you think about the fact that Lindsay Lohan wants to play her?” one reporter asked backstage after the awards show.

“Oh my gosh, I’ll decline to comment, actually, because that’s the first I’ve heard of that,” Winslet said. “I’m not gonna go there, dude. It’s a bit of a hot zone, I think.”

Winslet, 36, wore a black and white Jenny Packham gown with Fred Leighton jewels to the Golden Globes. Her date for the night was Richard Branson’s nephew, Ned Rocknroll. Winslet has been dating Rocknroll (nice last name!) since last summer, however this is their first public appearance together.