Meryl Streep still “can’t believe” she cursed at the Golden Globes. The Iron Lady star and Best Actress winner says she had “such a good speech” prepared before she left her pesky spectacles back at her table. The end result was one whopper of an acceptance speech! 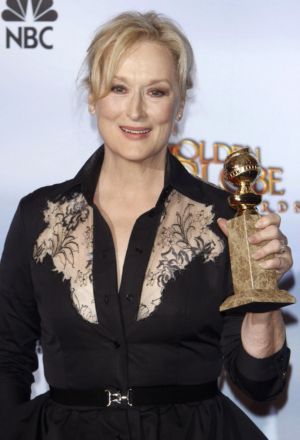 What did she just say?! Celebrated screen star Meryl Streep shocked the audience at Sunday’s 69th Annual Golden Globes after calling director Harvey Weinstein her “God” and dropping an “s-bomb” on live TV.

The Best Actress winner delivered an emotional, off-the-cuff speech as she struggled to remember who to thank after forgetting her reading glasses.

The red-faced 62-year-old star cursed after she realized she’d left the lenses back at her table.

“Ooooh s**t! Oh, my glasses. I forgot my glasses. Now I have to remember my speech,” she said.

A flustered Streep attempted to recite her speech from memory as producer Weinstein and The Descendants‘ George Clooney passed her glasses through the audience. The spectacles didn’t reach her in time, forcing Meryl to make up her speech on the spot.

She managed, cracking several jokes, including one aimed at controversial host Ricky Gervais, whom she said had been vying to play former British prime minister Margaret Thatcher in The Iron Lady.

“I just want to thank my agent and God — Harvey Weinstein,” Streep remarked, prompting a burst of laughter and raised eyebrows from the audience at the Beverly Hilton Hotel in Los Angeles.

“The punisher. Old Testament, I guess,” the actress continued, giggling.

Weinstein, who directed Streep in the critically-hailed biopic shook his head and covered his face with his hands to shield his laugh.

“I can’t believe I said ‘s**t’ on TV. I had such a good speech and I couldn’t see it. Even if you held it in the front row, I couldn’t read it because I left my glasses at the table,” a horrified Streep retorted to reporters backstage a few hours later.

Streep beat out Rooney Mara (The Girl With the Dragon Tattoo), Tilda Swinton (We Need to Talk About Kevin), Glenn Close (Albert Nobbs) and fan favorite Viola Davis (The Help) to earn her eighth Golden Globe.

“I think about each individual story and if the story’s interesting, it doesn’t matter if it’s a waitress or a queen,” Streep said. “I’m not discriminating that way. I’m happy to play interesting people who have challenges in one way or another.”