Nervousness of a sign of the times? Internet sensation Lana Del Rey gave Rebecca Black a run for her microphone after delivering a disastrous live performance on last weekend’s Saturday Night Live. 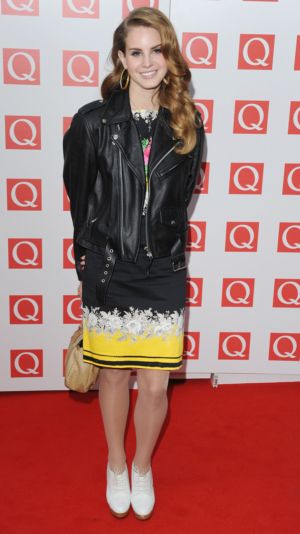 Lana Del Rey was the musical guest as Harry Potter-turned-Broadway star Daniel Radcliffe made his Saturday Night Live hosting debut over the weekend.

And boy did she stink up the place!

DanRad flexed his funny bone in a hilarious new skit on this week’s SNL — but it was Lana’s less-than-stellar delivery that had the blogosphere buzzing.

Fans continue to bicker over whether her lips are real and if her image was created by a record company. But here’s one thing everyone can agree on: Her performance on Saturday Night Live was a bit of a train wreck.

“Hype” doesn’t quite capture the buzz that has surrounded Lana and her deal with Interscope Records. Del Rey has courted controversy since the very second she shot to fame.

Del Rey was originally known as Lizzy Grant. The 25-year-old became an internet sensation after her breakout single, “Video Games,” racked up 13 million views on YouTube.

With her live weekend set, the singer became one of the only artists in history to perform on SNL before even dropping an album. The last artist to take on the famous stage before the release of a major label LP was Australian songbird Natalie Imbruglia.

Actress and singer Juliette Lewis was watching the show and tweeted this scathing critique of Lana’s performance: “Wow watching this ‘singer’ on SNL is like watching a 12-year-old in their bedroom when they’re pretending to sing and perform. #signofourtmes.”

Celebrity snitch Perez Hilton didn’t hold back either, blogging that Del Rey “bombed” in the performance.

“LOL, sorry, but her voice was all over the place. She was off-key and had zero stage presence,” he wrote. “She looked completely uncomfortable on stage and even made us uncomfortable just watching her.”

On Sunday, Lana blamed the poor performance on nervousness.

In an interview with MTV News last year, Del Rey was vocally defiant in response to questions about her authenticity.

“I personally don’t like drama of any sort… I just think it’s reflective of the times we live in and have been living in since the dawn of humanity,” the singer said. “People love terrible news, they love when things go wrong and they like to see people going off the tracks and people fighting, because it’s exciting and life is f***ing boring.”