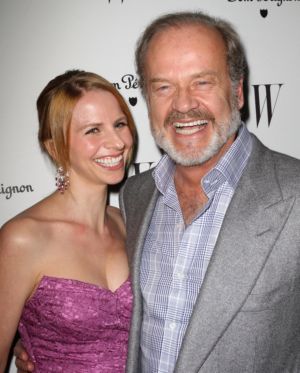 Not only did the Boss star score a Golden Globe for Best Lead Actor in a TV Drama over the weekend, he’s revealed that he and his wife, Kayte Walsh Grammer, are expecting twins.

“Fatherhood is always different based upon the character that drops into your life. They arrive and tell you what they have to do. I’m really looking forward to meeting these new arrivals.”

Kelsey thinks Kayte — a former flight attendant — will be an “extraordinary” mom.

“She’s the most loving, amazing and warm human being. She’s funny and serious. I think she’ll blow them away,” he explained.

Kelsey is already a father of four. He and Camille share a son and a daughter, 10-year-old Mason and seven-year-old Jude. The showbiz veteran is also dad to Greer, 19, with ex Barrie Buckner. Spencer, 28, was born during Kelsey’s union with Doreen Alderman.

The twins will bring the Grammer headcount up to six!

Kelsey Grammer and Kayte Walsh open up about miscarriage >>

The pregnancy is the second for Grammar and Walsh. The couple suffered a miscarriage in October 2010. Kelsey and Kayte announced the pregnancy the previous August, shortly after the star confirmed his breakup from Wife number three, Camille.

Kelsey remains in the throes of an acrimonious custody battle with Camille, 42. The former Frasier actor is suing his Playboy model ex for sole physical custody of Mason and Jude in a storyline presently playing out on Camille’s popular Bravo docu-soap.