He’s got the moves! Watch as Britney Spears’ son, Sean Preston Federline, shows off some fancy footwork to the sounds of Peaches & Herb. 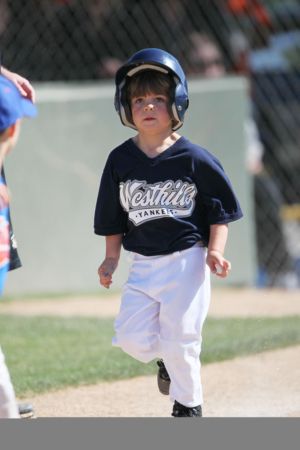 It looks like Britney Spears‘ eldest son may have inherited Mom’s performance genes.

Here’s what’s happening in the “Circus” songstress’ house right now: Mom is tweeting about her boys.

The other day, Brit posted a photo of Jayden James Federline, 5, “having some hair-raising fun on the trampoline.”

Now she’s tweeting about her other son, Sean Preston Federline. The 6-year-old is showing real promise as a dancer. And Mama Spears is just as pleased as punch.

Of course, when your dad is former backup dancer Kevin Federline, chances are fancy footwork is embedded in your DNA. The “Womanizer” singer has been performing elaborate dance routines herself professionally since the early ’90s, when she was cast as a youth performer on Disney’s The All New Mickey Mouse Club. Spears was also the opening act for ex-boyfriend Justin Timberlake’s former band, ‘N Sync.

The ex-couple’s 6-year-old son, Sean Preston, proved that he’s following in his famous parents’ well-choreographed footsteps by performing an elaborate dance routine to Peaches & Herb’s disco hit, “Shake Your Groove Thing.” Preston, as the tyke is most commonly called, perfectly mimicked the moves of the avatar in Ubisoft’s Just Dance Kids 2, the dance-related video game he was playing.

Preston was so into shaking his moneymaker that he was visibly displeased when he was interrupted by his brother. When Jayden James tried to get in on his big brother’s dancing fun, Sean pushed his sibling (and his tricycle) away from the television screen.

A recently-engaged Britney posted a link to the cute video on Twitter, with the message, “Preston getting his groove on!”