Rachel McAdams was the girl we loved to hate in Mean Girls and the girl we wanted to be in The Notebook. Now the gorgeous actress is back in another tearjerker, The Vow, co-starring Channing Tatum. Learn all about Rachel McAdams as she steps into our star spotlight! 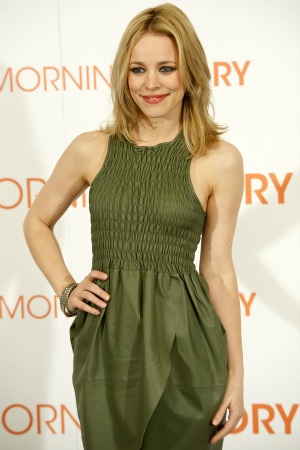 Famous Hollywood actress or champion figure skater? For Rachel McAdams, it could have gone either way. Growing up in Ontario, a young McAdams competed on the ice while honing her acting chops on stage. Eventually, acting won out — and now her fans get to reap the benefits.

McAdams graduated in 2001 from York University with honors and a bachelor’s degree in theater. Soon after, McAdams lit up the Hollywood scene, nabbing a role in the MTV pilot for Shogun Love Dolls and her first movie role in the Italian-Canadian production of My Name is Tanino. She moved on to La La Land the following year.

Now best known for her turn in uber-romantic flicks such as The Notebook and the upcoming tearjerker The Vow, McAdams actually started her career as the girl we love to hate in not one but two flicks: The Hot Chick — her very first Hollywood movie, in 2001 — and opposite Lindsay Lohan in Mean Girls in 2004.

The chemistry between her and Ryan Gosling in The Notebook made Hollywood really stand up and pay attention. The role won her an MTV Movie Award and four Teen Choice Awards, as well as her pick of nearly any project she wanted.

The actress decided to stretch her wings back to comedy and teamed up with Owen Wilson, Bradley Cooper, Isla Fisher and Vince Vaughn in Wedding Crashers, then moved into the thriller genre with Cillian Murphy in Red Eye.

The Vow: See the trailer and an exclusive image >>

After a supporting role in 2008’s The Family Stone, McAdams took a break; we didn’t hear a peep out of her for two years. “It was the right thing for me to do at the time,” she later told the New York Times. “If you want to tell stories as truthfully as possible, you have to have a normal, boring existence.”

McAdams returned with a bang in three 2009 films: State of Play, The Time Traveler’s Wife and Sherlock Holmes — all to critical acclaim.

Since then, we’ve enjoyed watching her in Morning Glory, Midnight in Paris and Sherlock Holmes: A Game of Shadows. In her latest role, she returns to her tearjerker beginnings in The Vow with Channing Tatum, playing a newlywed who loses her memory of her life and marriage while Tatum tries to get her to fall in love with him all over again.

Will their chemistry be as hot as that between her and Gosling? Judge for yourself when The Vow hits theaters Feb. 10, 2012.