The season may be over, but the drama on The Real Housewives of Beverly Hills rages on. As viewers anxiously await the reunion, SheKnows chats exclusively with Brandi Glanville about her beef with Kyle Richards.

From day one, the women of The Real Housewives of Beverly Hills had it out for the newbie on the show, leggy, former model Brandi Glanville.

“You have to get jumped into the gang,” Glanville told SheKnows, when we stopped by her home recently. “It was like my initiation.”

From her crutches to her parenting style, Glanville’s fellow Housewives found no shortage of topics to poke fun at. Though tensions got extremely high at some points, Brandi maintains that she was never looking for an argument. 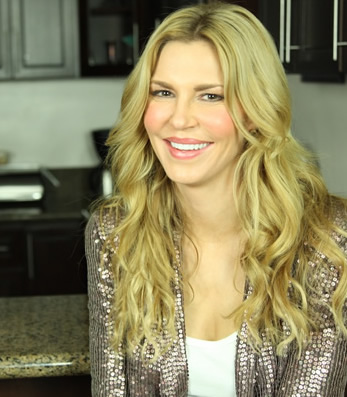 Over coffee talk, Brandi Ganville tells SheKnows how she feels about becoming a regular on The Real Housewives of Beverly Hills.

“I don’t really start fights,” said Glanville. “It’s not in me to do it. But don’t mess with me, because I’m crazy.”

Glanville’s main opponent this season was Kyle Richards, who she went head-to-head with after accusing Kyle’s sister, Kim Richards, of using drugs.

“Part of me really likes Kyle, and then part of me doesn’t,” Glanville told us. “If you have that in you, to be that mean, that’s a little bit scary.”

The worst of their run-ins took place in an episode called “Game Night,” where an argument between Kyle and Brandi got so heated, it almost led to a physical altercation. Brandi says that, despite Kim’s participation in the event, she still thinks Kyle is to blame.

“Kim can’t really take responsibility for her actions because she wasn’t well at the time,” said Glanville. “Kyle doesn’t have a problem, so I can’t give her any excuses, except for just bad behavior.”

Since that episode and the accusations, news broke that Glanville was right, and Kim had entered rehab. Despite her issues with Kim, Brandi tells us she is happy her co-star got the help she needed.

“I was really happy for her family,” said Brandi. “She’s a mom and everyone cares about her, so obviously there’s some good in her. She just has to get better.”

Though it seemed the relationship between Brandi and Kyle eventually improved, Brandi tells us the reunion will reveal that some things never change.

The Real Housewives of Beverly Hills reunion episode airs Monday, Jan. 30 on Bravo. Check back with SheKnows Entertainment for part two of our interview with Brandi!

How to get the look: 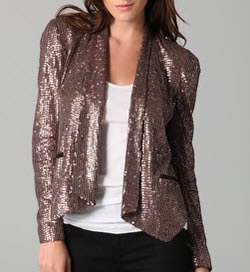 Brandi Glanville is sporting the Rebecca Minkoff pink-sequined Becky Jacket above. This gem can be work worn with a sophisticated bottom or some grungy, weekend jeans. 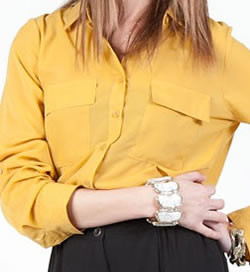 A button down blouse in mustard hue by Sosie. This top is the perfect alternative to a classic white button-down. Read more about wearing mustard hues here. 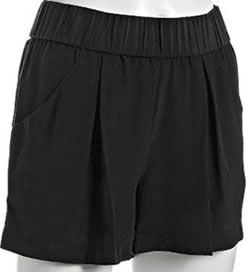 A classic black short from BCBG Maxazria. This short works for all seasons — just throw on some black tights in the colder months and show off those long legs in the summer heat.