George Clooney is the man of the hour. The actor took top honors at last night’s Critics’ Choice Awards, where he beat out Brad Pitt, Ryan Gosling and Leonardo DiCaprio for Best Actor. 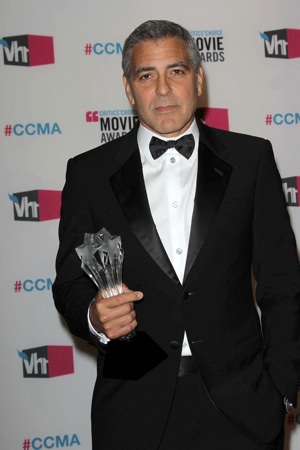 George Clooney won big at the 17th annual Critics’ Choice Awards. He earned the Best Actor statue for his performance in Alexander Payne‘s The Descendants.

Clooney faced stiff competition from fellow A-listers Brad Pitt (Moneyball) and Leonardo DiCaprio (J. Edgar), but walked away top dog. When his name was announced, the audience applauded as he embraced friends and supporters, including girlfriend Stacy Keibler.

While Clooney took Best Actor, his longtime friend and The Help star Viola Davis won Best Actress. The duo recently appeared on the Oscar race issue of Entertainment Weekly where they discussed the disadvantages for women in Hollywood.

Clooney wants babes of all ages to get good work, not just starlets.

He told the magazine, “There’s this strange thing that’s happened over the last 25 or 30 years where there’s this decision being made that women aren’t able to carry the box office. When a man hits 40 is when roles just begin to happen. And for women it doesn’t happen. I find that to be a very concerning issue.”

That’s one of the reasons we love Clooney. He’s brutally honest and generous to his acting peers.

If you missed last night’s broadcast of the Critics’ Choice Awards, we have the complete list of winners below.