Kim Kardashian keeps a whopping 90 percent of proceeds from her so-called charity auctions, according to a new report. What other celebs are profiting off of the generosity of their fans? 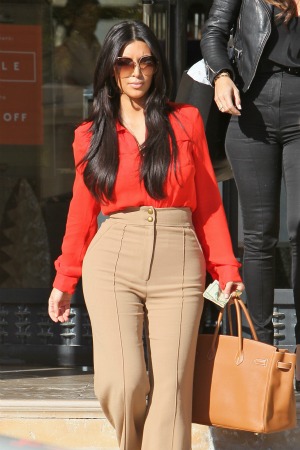 Kim Kardashian and tons of other stars auction off their personal items through eBay Giving Works — but how much of the proceeds go to the actual charity and how much winds up lining the pockets of the celebrity? The answer will shock you.

According to Glenn Selig, President/CEO of Selig Multimedia, “Many times the public assumes that all the proceeds go to charity and not the celebrity, but that is often not the case. The public should never assume that 100 percent goes to charity.”

The Kardashians don’t care about Americans >>

In fact, Kim Kardashian herself admitted on her blog while promoting one such auction that a mere 10 percent was going to charity — meaning the star was keeping 90 percent of the profit for herself.

Kardashian also donates items to the Dream Foundation under the auspices of honoring her late father Robert Kardashian. “My dad passed away from cancer so the funds go towards granting wishes for terminally ill adults,” Kardashian told Pop Tarts.

Unfortunately, that support extended to only 25 percent of the total funds raised for a meet and greet. Hey, you don’t make $650 million in one year by giving all your money away, right?

Of course, Kim and her family believe that any donation is better than none.

“They strongly believe that every little bit counts and there have been many instances where they have privately donated the whole sum of an earning to a charity, and they would like to continue to do some of these things privately,” an insider told Fox.

A rep for the Dream Foundation said the donations of the Kardashian family are always welcome in any amount.

Kim Kardashian: Haiti was not a shopping trip >>

“Kim has contributed hundreds of thousands of dollars to Dream Foundation, and more importantly, has always made herself available on a personal level to hold the hand of a dream recipient battling terminal illness,” the rep said. “Regarding the online auctions, 10 percent is significant when considering the number of dreams that have been fulfilled as a result, and we are grateful for Kim’s loyal support.”

But Kim Kardashian is not the only offender. Paula Abdul only gave ten percent of her 2009 online auction to benefit the American Humane Association, and Khloe Kardashian and Lamar Odom regularly only give 15 percent of their auction proceeds to the NBA star’s own foundation for underprivileged youth.

Some celebs do get it right, though: Sienna Miller, Miley Cyrus, Barbra Streisand, Steven Tyler, Charlie Sheen and Nick Cannon all gave 100 percent of monies raised in their various celebrity auctions to their chosen charities.