New mom Lily Allen is learning that breastfeeding can be full of mishaps. Find out just what went wrong, and what the singer has to say to those who think her tale is “disgusting.” 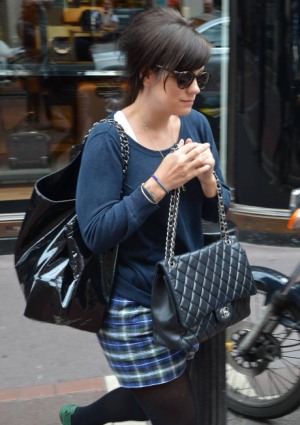 Lily Allen‘s personal breastfeeding blunders have become public conversation thanks to the microblogging site known as Twitter. The 26-year-old, who gave birth to daughter Ethel Mary on Nov. 25, may have given fans a little too much information.

While describing her day, which had included a stop at The Wolseley restaurant in London, Lilly Allen wrote Jan. 10, “And I left the house without breast pads and started leaking all over myself at the #Wolsley. oh and I wiped out in the street earlier #glam.”

One fan didn’t hold back their disapproving thoughts, and replied to Allen, “that’s really disgusting I don’t know why you’d publicize that.”

In response the mother of baby Ethel shot back, “what do you mean it’s BEAUTIFUL !!!!! Boobs are not just #sexyfunbags, they be feeding implements too.”

Yet another fan asked, “What’s your milk-pressure like? Can you use your tits like guns? I used to be able to hit things ten feet away.”

Lily Allen replied, “are you talking about my let down reflex? if so, pretty good, yes 10 ft sounds about right.” She then went on to retweet the message, “Let the people in charge of the Olympic Closing Ceremony know. You could put the flame out!”

Do you think Lily Allen’s breastfeeding tweets are TMI?