The star-crossed lovers of Disney’s hit Tangled tie the knot in a short film scheduled to debut before Beauty and the Beast 3D. 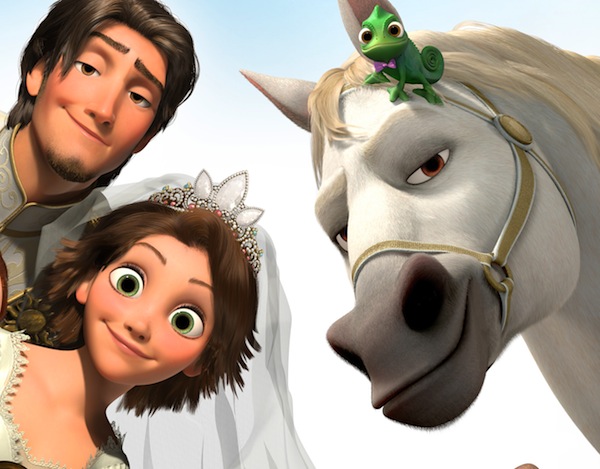 If you fell in love with every strand of luscious locks from Disney’s 2010 hit movie Tangled, you won’t want to miss the follow-up episode to hit theaters in short form before Beauty and the Beast 3D, rereleasing Jan. 13.

Fans of the misfit love story between Rapunzel (voiced by Mandy Moore) and Flynn Rider (voiced by Zachary Levi) will remember leaving this dynamic duo just as they finally freed themselves from the chains that bound her from a crazy mother and him from a checkered past.

Going to the chapel…

Free to follow their path to love, these two can finally get hitched!

And Disney doesn’t waste a minute of time reuniting fans with this adorable love story. Available in the theater before each screening of the rereleased classic Beauty and the Beast 3D, Tangled Ever After catches us up to the cute couple as they’re about to get married.

Beyond Tangled: Inside the Disney smash >>

In a royal wedding sure to make Kate and Will’s celebration look like just another day in Vegas, the short teases audiences with a taste of what might happen if there were ever to be a sequel.

Disney has not announced any plans to move forward with a Tangled 2. In fact, just before the release of the first film, the movie studio publically swore off fairy tales. We’re thinking they want to eat those words now since the original made over $200 million at the box office. Not bad about a would-be princess with a head full of gorgeous hair.

We’re hoping response from this short film will let the studio know that fans adored these characters and we’d love to see them get all knotted up just one more time.