Cancel the plans you’ve been making with the girls since hearing the rumors of a Wisteria Lane-based movie. Marc Cherry is leaving Desperate Housewives with a few loose ends, but has no plans to bring the gals to the big screen. 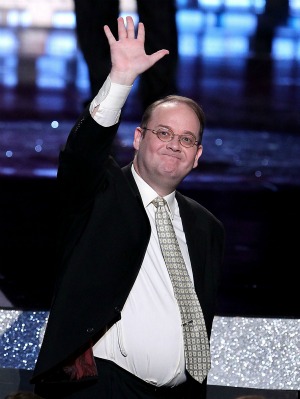 The ladies of Wisteria Lane certainly fit the bill of big screen characters. Sadly, Marc Cherry isn’t giving in to desperation and putting his iconic housewives on the big screen.

Hands in the air ladies if you’ve dreamed of eating a fresh tub of popcorn while watching your favorite Desperate Housewives characters in movie form.

Yeah, we’re kind of bummed about the latest news coming from the TCA Tour in Pasadena, too.

According to a report via the Washington Post, producers told reporters at the TCA Tour in Pasadena that the Desperate Housewives series finale will leave a “few loose ends hanging,” but fans shouldn’t get excited about waiting for a “reunion movie.”

Creator Marc Cherry said that eight seasons has been enough time to “plumb the depths” of the ladies who have been so brilliantly brought to life by Teri Hatcher, Felicity Huffman, Marcia Cross and Eva Longoria, as well as the rest of the cast.

Marc Cherry isn’t interested in putting his famous housewives on the silver screen like Sex and the City did. Referring to Sex and the City 2, Cherry said, “I’m just never sending these gals to Dubai.”

TV to heat up your winter >>

One thing Marc Cherry didn’t give up at the TCA Tour was any of the finale’s secrets. All he said was there will be some “old, familiar characters,” adding, “I’m being hyper-protective of it.”

Will Cherry keep his promise of a cameo when the show takes a bow this spring? The creator kidded, “I’m gonna do a Hitchcock. The hair and makeup people will go through more hell that day than they ever have.”

Do you think Marc Cherry will continue his stance to keep the ladies of Desperate Housewives off the big screen, or will he give in?