All eyes will be on Kelly Clarkson on Feb. 5, when she tackles the national anthem at Super Bowl XLVI. 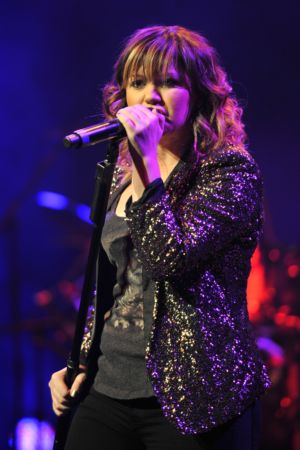 Psst…You didn’t hear it from us, but former American Idol Kelly Clarkson is the pop powerhouse tapped to belt out the national anthem — officially called “The Star-Spangled Banner,” in case you were wondering — at next month’s Super Bowl l XLVI in Indianapolis.

The NFL isn’t expected to reveal the Super Bowl anthem singer until later this month, but a tittle tattle in-the-know dropped the nugget to The Associated Press Wednesday.

The original Idol follows in the footsteps of Jennifer Hudson, another ex-A.I. songbird who did the Super Bowl anthem honors in 2009.

The national anthem was at the center of a “star-spangled” blunder at last year’s faceoff between the Packers and Steelers in Dallas. Pop star Christina Aguilera — the proud owner of five Grammy Awards — was the subject of ridicule (and questions about her sobriety) when she flubbed the fourth line of the beloved tune.

Here’s hoping Kelly can deliver her opening number with the lyrics still intact.

Joining Clarkson in the Super Bowl pregame festivities at Lucas Oil Stadium will be country music couple Miranda Lambert and Blake Shelton. The twosome has been tapped to sing “America the Beautiful” — succeeding Glee’s Lea Michele.

Coincidentally, Clarkson and Shelton will also be teaming up when the singer appears as a guest star on the popular NBC singing competition, The Voice, where Blake is a regular mentor. The show will premiere its second season right after Sunday’s game.

And of course, pop queen Madonna will provide the halftime entertainment at this year’s championship game. She’s partnered with a creative team from Cirque du Soleil, Jamie King and multimedia artists from Moment Factory to create what the NFL and NBC are billing as “a signature performance.”

The big championship game goes down Feb. 5 on NBC.