Sometimes, the best ideas come from personal experience. Enter Jessica Simpson, who plans to help pregnant women everywhere feel great in the clothes they’re in with the launch of a maternity clothing line. 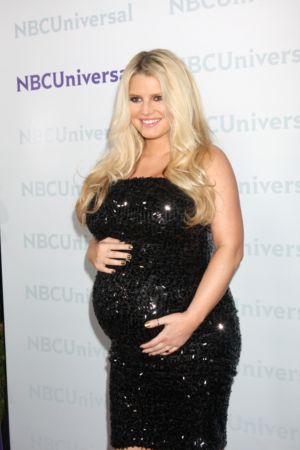 Jessica Simpson is pregnant and tired of hunting for clothing that doesn’t make her look like “a house.”

Jess was lucky to have avoided the perils of morning sickness in the early days of her pregnancy.

The perils of maternity clothing? Yeah, not so much.

Everyone’s favorite perplexed pop tart hasn’t found much to love about the attire expectant moms are relegated to wearing while their tots are in utero.

So the billionairess fashionista is taking matters into her own entrepreneurial hands: Jessica is adding a line of maternity clothing to her already lucrative lifestyle brand.

She isn’t wasting any time with this new idea, either. The Jessica Simpson Maternity line could arrive on racks as early as next month!

Simpson made the announcement while chatting up her mentor role on NBC’s Fashion Star at the Television Critics Association press tour on Friday. The new reality show (premiering March 3) gives 14 unknown designers the chance to launch their collections in three huge retail venues – -Macy’s, H&M and Saks Fifth Avenue.

“The next thing you will see from the Jessica Simpson Collection is maternity,” the singer-turned-stylista told TV critics at last week’s session.

No stains please: Jessica Simpson to deliver in heels >>

Jess is busy crafting lots of denim and things that will show off a baby bump while making Mom feel gorgeous at the same time. The denim idea will service women who aren’t in the mood to get dressed up, but still want to look great, Simpson explained.

This baby bump is turning into a pretty lucrative business for the 31-year-old. Simpson, who is engaged to beau Eric Johnson, has reportedly already inked a multimillion-dollar deal with Weight Watchers to use and endorse the system as she works to lose her pregnancy weight.