Can Myspace TV be saved? Justin Timberlake isn’t letting it go down without a fight. 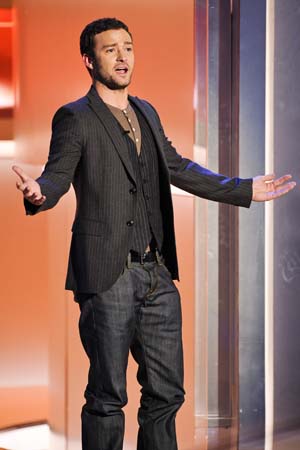 You know how everyone laughed when word emerged that Justin Timberlake purchased a stake in the failing social network Myspace? Well, the newly-engaged actor and singer might have the last laugh.

Timberlake presented his vision for Myspace TV on Monday afternoon at the Consumer Electronics Show in Las Vegas.

“We’re ready to take television and entertainment to the next step by upgrading it to the social networking experience,” Timberlake said, explaining that Myspace TV will encompass the network’s 42 million songs and 100,000 music videos and allow for constant communication between friends, according to Rolling Stone.

“The future of Myspace is about what you’re going to do,” he added, pulling his best Mark Zuckerberg imitation. “About who you’re going to become. Myspace TV is the first foray into that future.”

Myspace hopes to recapture users from competitor Facebook using the “immediacy” of communal experience, whatever that really means. Sponsor Panasonic is on board to help them achieve just that.

“As the plot of your favorite drama unfolds, the joke of your favorite SNL character plays or even the last-second shot of your favorite team swishes the net, we’re giving you the opportunity to connect your friends to your moments as they’re actually occurring. This is the evolution of one of our greatest inventions, the television,” said Timberlake.

Timberlake purchased his stake in the once-popular social network in June.

“There’s a need for a place where fans can go to interact with their favorite entertainers, listen to music, watch videos, share and discover cool stuff and just connect. Myspace has the potential to be that place,” he said at the time.

“Art is inspired by people and vice versa, so there’s a natural social component to entertainment. I’m excited to help revitalize Myspace by using its social media platform to bring artists and fans together in one community.”

What we want to know: Will he try to sneak in Myspace TV placements into his upcoming movies and appearances, à la Ashton Kutcher? Let’s hope not.

Do you think Myspace can make a comeback?