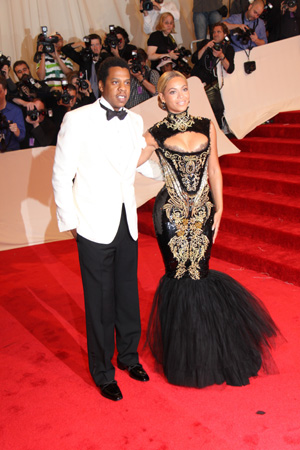 Only the best for Blue! Beyoncé and Jay-Z decided the regular hospital rooms weren’t quite posh enough for the birth of their first baby. Before Blue Ivy Carter was born,  the parents-to-be reportedly paid for the hospital to have an extreme makeover.

“A month ago, [workers] tore down six to eight rooms and turned them into two suites,” a source from Lenox Hill hospital told Us Weekly, saying the power couple “paid to have it constructed just for them.”

“You’d want to live in there!” the source said.

The hospital source says the lush suites had many luxurious accents — including “mahogany walls” — however, the “amazing” suites sat empty for a month until Blue was born on Jan. 7!

There was a Beyoncé backlash after Blue was born with hospital patients complaining that they could not see their babies in the NICU because of the singer’s security guards.

“They just used the hospital like it was their own and nobody else mattered,” one dad said, revealing that her entourage had the entire sixth floor off-limits.

Will Beyoncé be a good mom? >>

Lenox Hill denied the allegations in a statement that read:

“Lenox Hill Hospital and its staff were delighted to welcome the Carter family for the birth of their firstborn on Saturday evening, but we are troubled by the misinformation being circulated in some news media reports. The suggestion that the couple paid $1.3 million to rent an entire maternity floor is simply not true. The family is housed in an executive suite at the hospital and is being billed the standard rate for those accommodations. Our executive suites are available for any patient, including the food service and amenities provided to the Carter family.”