Modern Family is taking a walk on the wild side. The ABC comedy will push the envelope, when the youngest member of the Pritchett clan learns and says their first curse word. 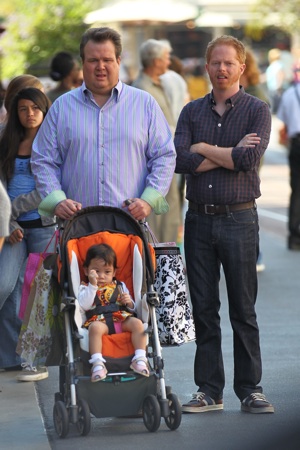 During the first two seasons of ABC’s Modern Family, the adopted daughter of Cameron (Eric Stonestreet) and Mitchell (Jesse Tyler Ferguson) was portrayed as silent and unaffected. She was the perfect contrast to her over-the-top parents.

But this year, Lily Tucker-Pritchett (Aubrey Anderson-Emmons) has gone from mute infant to boisterous toddler. In an upcoming episode, not only will she speak, but she’ll drop the F-bomb!

Why would Modern Family have a child curse on national television? Creator Steve Levitan believes it’s a traumatic event that all parents can relate to.

The thought of your son or daughter picking up a dirty word and repeating it in public is alarming. And in Lily’s case, she says it at a wedding, which is even worse.

Levitan recently spoke at the winter TCAs and explained the logic behind the story.

“We thought it was a very natural story since, as parents, we’ve all been through this,” said Levitan. “ABC will tell you Modern Family gets away with a lot, because I think it’s all about context. We are not a sexually charged show. It has a very warm tone so people accept it more. I’m sure we’ll have some detractors.”

When Lily drops the F-bomb, it won’t be audible to viewers. She’ll be shown saying it, but we won’t hear a thing. The network won’t let them get away with too much. Levitan told Entertainment Weekly, “We had to really convince ABC.”

The episode is called “Little Bo Bleep” and is scheduled to air next week.