Roxy Music’s Bryan Ferry married his girlfriend Amanda Sheppard, who happens to be 37 years younger than him, on Jan. 4 in Turks and Caicos. 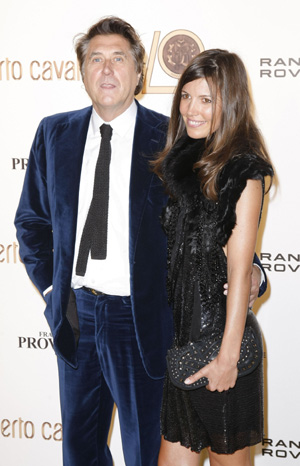 It looks like Roxy Music singer Bryan Ferry is a slave to love! The singer, who released his hit song “Slave to Love” in the 1980s, has tied the knot with his girlfriend Amanda Sheppard on Jan. 4 in Turks and Caicos.

Ferry is 66 years old and Sheppard is 29 years old — however the singer doesn’t think much of the age difference. “You never meet people your own age who aren’t married. Unless they are divorcées knocking about, that sort of thing,” he told the U.K. Telegraph.

Did we mention that Ferry was also a “divorcée knocking about?” He was married for 21 years to Lucy Helmore before divorcing in 2003. They have four sons together, named Merlin, Tara, Isaac and Otis.

How did he meet his blushing bride? Sheppard used to date one of his sons!

No word if his sons attended his wedding at the posh Amanyara Resort in the Caribbean. A spokesman reports that the couple exchanged vows in a “simple private ceremony.” Sheppard, who is a fashion PR executive and party planner, wore a wedding gown designed by Lanvin, while Ferry wore a dark blue suit by Anderson & Sheppard. Did we mention Ferry made GQ‘s list of the 25 most stylish musicians of all time?

Hopefully the second time will be a charm for Ferry, who, prior to his first marriage, was dumped by Jerry Hall who left him for Mick Jagger.

Ferry, who was hospitalized last year after a heart scare, said he may have kids with Sheppard, but he is not sure. “Oh, I never feel comfortable predicting the future,” he said.

24 hrs ago
by Reshma Gopaldas