Does Halle Berry have wedding bells in her future? That’s the buzz right now. A Hollywood jewelry designer says the big screen beauty is engaged to French actor Olivier Martinez. 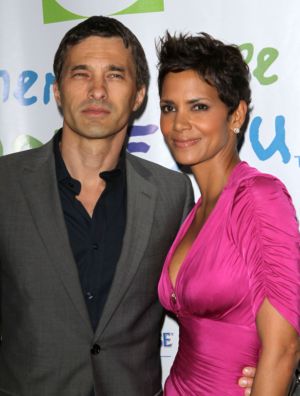 Well, what do you know? There is life after Gabriel Aubry!

A rep for jewelry designer Gurhan says the actor sealed the deal with a diamond and emerald ring that he presented to the twice-wed Oscar winner over the holidays.

Olivier and Halle hooked up as co-stars in the motion picture drama Dark Tide back in October 2010. It was only five months after the actress called time on her union with Aubry, a Canadian model and the father of her 3-year-old daughter, Nahla.

As a young actress, Halle, now 45, dated several big name celebs, including actor Wesley Snipes and R&B star Christopher Williams. Both relationships ended on a sour note. And both men have been suspected, at one point or another, of being the mystery man that allegedly struck Halle in a fit of rage, causing the beauty permanent hearing loss in one ear.

Berry has been married twice before: First to MLB ace David Justice in the early 1990s and again to singer Eric Benét, whom she wed in 2003.

Both marriages, like many of Halle’s romantic entanglements, were a mess.

Eric famously battled sex addiction, prompting a trip to rehab and an embarrassing scandal that saw the R&B crooner romantically linked to a bevy of other women. They divorced in 2005.

Halle once famously declared that she would never again marry.

Simply cohabitating didn’t save her romance with Aubry. Just last year, the exes were teetering on the edge of a custody blowout.

Gabriel argued that he wasn’t being allowed enough time with Nahla. Halle countered that he had the parenting skills of a baby chicken.

“Halle has serious concerns for her daughter’s well-being while in the care of her father for any extended period of time and is prepared to take all necessary steps to protect her,” the actress’ rep said in a statement last January.

“Halle has always made the needs and safety of her daughter her first priority and, both while Halle and Gabriel were a couple, and since their break-up, Halle has only acted in her daughter’s best interest.”

Is Olivier frightened about the prospect of marrying a woman with a bit of — er— baggage?

Olivier is also well-versed on the perils of being in a high-profile relationship. The French screen stud just happens to be the former boyfriend of Australian pop star Kylie Minogue.

Reps for Olivier and Halle aren’t confirming the engagement chatter. But insiders with ties to the twosome say the bride-to-be is thrilled.

“[She] had given up on being married, but she trusts Olivier. He makes her feel safe. He’s a keeper!”

Is Halle Berry the “marrying kind?”