English media darling Cheryl Cole wants Rihanna to lay down some vocals on her upcoming third solo album. The record will be Cheryl’s first since being bumped from the cast of FOX’s The X Factor last year. 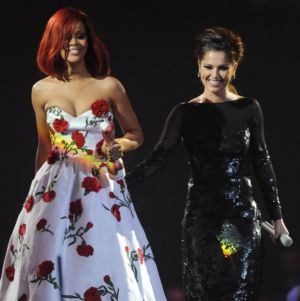 Ousted X Factor judge Cheryl Cole is enlisting the help of Rihanna to ensure her next album is a chart-topping titan.

Cole is returning to the world of pop for the first time since she was uprooted from the judges panel of the FOX talent show by mentor Simon Cowell.

Who better to co-sign her comeback than RiRi? After all, the Bajan mama has officially sold more digital downloads than any other artist in music history and her sixth studio album, Talk That Talk, continues to climb the international charts.

“It’s a big year for Cheryl. She can’t wait for her fans to hear the music she’s been passionately working on over the past 12 months,” an informant tells The Daily Mirror.

The “What’s My Name” singer, 23, is set to work on a remix for the former Girls Aloud frontwoman’s new solo record, due out in March. It’s all a part of Cheryl’s enduring hope of splashing onto the Hollywood radar.

The girls got along well after meeting for the first time at Rihanna’s Loud concert tour stop in London last month.

“She has struck up a friendship with Rihanna, who recently dueted with Brit star Calvin Harris,” the insider tells the newspaper.

Simon Cowell: Cheryl Cole is “still grumpy with me” >>

“Rihanna thinks the world of Cheryl and will work on a party remix with her when they meet up on her next visit. The album fuses pop, hip hop, soul and dance. It already has some party anthems on it, but Rihanna’s would get everyone up on their feet.”