It looks like another year of legal troubles ahead for Lindsay Lohan. The scandal-plagued actress has been slapped with a $93,000 tax lien after failing to fork over the hefty sum in unpaid incomes taxes to the Internal Revenue Service. Oh — and then there’s that recently filed lawsuit. 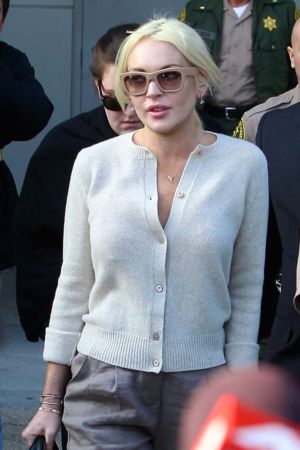 Psst… Hey Lindsay, Uncle Sam thinks it’s time you two had a long chat about the hefty sum you owe the U.S. government in back income taxes.

Deadline Hollywood snoops say Lindsay Lohan is in “early talks” to portray legendary Hollywood actress Dame Elizabeth Taylor in a made-for-TV movie that will premiere on Lifetime later this year. The troubled starlet, who recently posed in a Marilyn Monroe-inspired shoot for Playboy magazine, is reportedly being considered for the lead role in Lifetime’s Elizabeth & Richard: A Love Story.

It’s a good thing. Lohan will need the gig — and probably a few more — in light of her latest cash-flow troubles.

According to TMZ, the Internal Revenue Service (IRS) has slapped the legally-addled starlet with a $93,000-plus lien over unpaid back taxes dating back to 2009.

Should Lohan fail to make good on the debt, the IRS could go after her possessions — property, vehicles, bank accounts — in an effort to collect.

A Lohan spokesperson insists “Lindsay was completely unaware of the problem.” The former “Mean Girl,” who recently “cleaned house” and replaced a large portion of her business managers, believes the debt was most likely “lost in the shuffle.”

The official word: “The issue will be handled immediately.”

Additionally, a paparazzo is suing the actress over a car accident outside a Hollywood club on Jan. 10, 2010.

According to court documents, Grigor Balyan claims he was taking pictures of Lohan as she sat in her car. Livid, the starlet then allegedly struck him with the vehicle, causing personal injury, property damage and other losses.

Baylan is seeking an unspecified sum in monetary damages.

The last three years haven’t been very lucrative for Lohan — apart from the reported $1 million smackers she pocketed to strip down for Playboy.

The 25-year-old was last seen on the big screen as a gun-totin’ nun in Robert Rodriguez’s 2010 flick Machete. Lindsay’s made-for- TV movie Labor Pains aired on ABC Family in 2009.

Between the tax lien, the lawsuit and her pile of legal bills, Lohan might want to keep those roles coming in for a while to come.

And if all else fails, there’s always reality TV.