Christina Aguilera might be a bit curvier than in the past, but the singer says she’s perfectly content with her body — and you should be, too. 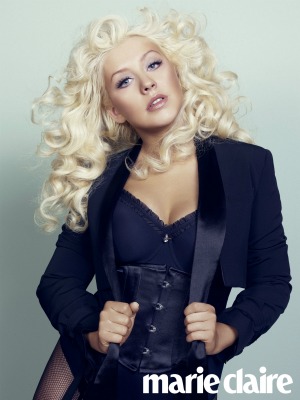 It has been a rough couple of years for Christina Aguilera: A divorce from husband Jordan Bratman, a run-in with cops over DUI allegations, Burlesque totally bombing, and now Christina Aguilera is dealing with constant criticism over her fluctuating weight.

In a new interview with Marie Claire, The Voice judge says the only people whose opinions matter to her are herself, her boyfriend (Matthew Rutledge, whom she met on the set of Burlesque) and her son — and they like her just the way she is.

“Between my divorce and the other things I went through, a lot happened,” Aguilera told the mag. “It’s hard for anyone to go through that in public. But when you’re a celebrity and under a microscope, it’s 58 million times harder. I grew an even thicker skin after that hard year.”

“I’ve been criticized for being on both sides of the scale. It’s noise I block out automatically. I love my body. My boyfriend loooves my body. My son is healthy and happy, so that’s all that matters to me.”

That doesn’t mean the singer doesn’t have her own body issues — it just means she accepts herself for how she is in every moment.

“I have certain physical features that I favor over others. We all have our areas,” Aguilera said. “When I worked on Burlesque, I lost so much weight that I was too skinny. I don’t weigh myself — it’s all about how I feel in my clothes. What looks good on one person might not look good on another body type. I happen to be very confident in my own skin. It takes time to get to that place, but it’s all about embracing yourself and your body.”

Read the complete interview with Christina Aguilera in the February 2012 issue of Marie Claire.